By Peter Robinson, Yuki Okatsu
Robinson is an extension dairy specialist with the University of California-Davis. Okatsu is his former graduate student researcher. 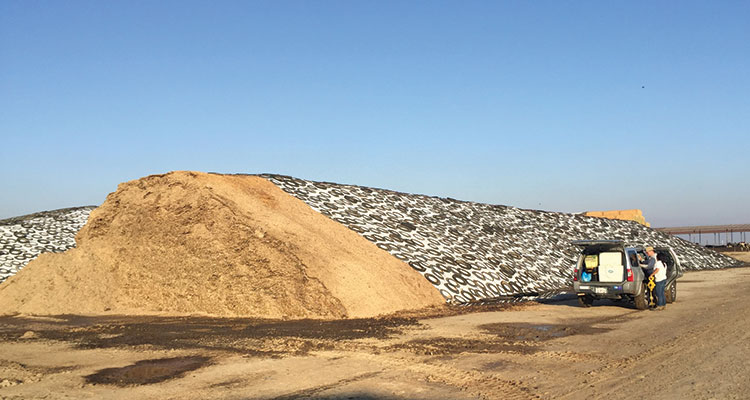 Of the several types of silos used commercially, pile silos, which ensile forage under a plastic cover after packing, are popular in many areas, especially on large farms. Advantages of pile silos over other silo types include low facility costs, high flexibility of the amount of crop ensiled, and unloading ease. However, silage piles have a large surface area to mass ratio and potential exposure to air, making them prone to spoilage at the periphery of the exposed silo face during feedout.

The degree of aerobic silage deterioration is affected by depth of penetration of ambient air into a silage mass, which is itself influenced by silage density, porosity, and dry matter (DM) content. Silages with higher density have less air penetration as more air is excluded from silage particles during packing.

To maintain low air penetration in silage with higher DM, more packing is needed because there is more space between particles. However, this is successful to a limited degree in high DM crops as they generally do not remain fully compressed, even after repeated packing.

The DM loss of corn silage in bunker silos after 180 days of ensiling has been shown to decline from 20 to 10 percent when density improved from about 30 to 70 pounds of wet weight per cubic foot. Over 40 pounds per cubic foot of wet weight density is widely recommended to minimize air penetration and minimize deterioration.

However, there are a wide range in densities in different locations of a pile silo, with silage on the surface and edge having much lower density relative to that deep in the silage mass. In pile silage, spoilage often occurs in surface areas near the exposed face, likely because this area is exposed to air throughout feedout.

The number of days after silo opening could affect surface silage spoilage. Although silage piles are covered by plastic covers and weights during storage and feedout, it is impossible to completely prevent air penetration between the cover and the silage. Our group has recorded high mold and yeast counts in silage as far as 23 feet behind the exposed face, which suggests spoilage in the exposed face peripheral area progresses into the pile.

Faster feedout speed of silage in piles, or the speed that a silo face moves due to silage removal, has been suggested to be one of the most effective ways to minimize deterioration of silage during feedout. In British studies, the minimum recommended feedout speed was 4 to 12 inches per day, and faster during summer. In the Netherlands, 6 to 12 inches per day was recommended during winter, and twice as fast in summer.

An Italian study, which used over 100 silage bunkers, showed that the proportion of visibly molded silage in the exposed surface area of bunker silage declined sharply when feedout speed reached 9 to 11 inches per day. Wisconsin researchers reported 3 percent DM loss at 6 inches per day but 9 percent loss at 2 inches per day. 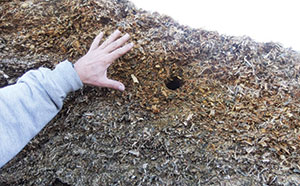 Spoilage is evidenced by gray mold and an underlayer of discolored silage.
We initiated a study to assess the effects of feedout speed, days after opening, and surface density on degree of spoilage of silage at the periphery of the exposed silage face. Ten commercial corn silage piles in the San Joaquin Valley (California) were used. After storage periods of 30 to 120 days from pile building to opening, the plastic covers were cut open and silage was removed daily with a front-end loader.

Average silage temperature and pH in the deep mass silage was 97°F and 3.66, respectively, with low variation. Lactic acid was 4.5 percent of DM, and made up 76 percent of total bacteria in the silage. Average deep mass pack density was 50 pounds of wet weight per cubic foot, which is higher than the San Joaquin Valley Air Pollution Control District minimum of 40 pounds of wet weight per cubic foot for corn silage.

Rapid feedout speed is considered key to preventing spoilage of silage in piles because it minimizes the time that silage particles are exposed to ambient air. It also prevents microbes from being activated by oxygen and initiate spoilage. The average feedout speed of our low- and high-speed piles was 11.5 and 23 inches per day.

The higher temperature and pH, as well as lower lactic acid, in low- versus high-speed piles suggests that slower feedout speed allowed aerobic microbes to proliferate and create more spoilage in the exposed face peripheral area. Fewer lactic acid bacteria (LAB) in low-speed piles also suggests that spoilage initiation was more progressed, especially since they had higher levels of propionic and butyric acids, which indicate activity of Clostridium and yeasts. The similar yeast and mold counts in low- and high-speed piles suggests that spoilage in low-speed piles was in transition from initiation to mid-stage as indicated by the rise in temperature and pH, and lower in lactic and acetic acids, as well as LAB.

If spoilage in surface silage is caused by air ingress between plastic covers and silage, piles fed sooner after opening should have a lower degree of spoilage than piles that have been open longer. The average days open of our short- and long-open piles were 69 and 110.

The reduction in lactic and acetic acid levels in long-open piles indicates that these acids were likely more extensively degraded by aerobic microbes due to longer exposure to air, which likely let molds proliferate. That these piles tended to have higher Clostridium levels suggests co-existence of an anaerobic and aerobic environment during spoilage.

Overall, long-open piles were judged to be in transition from mid- to advanced stage of spoilage as indicated by higher mold counts and pH, and lower lactic and acetic acid levels. In contrast, short-open piles were between the initiation and mid-stage as indicated by lower mold counts and pH, and higher lactic and acetic acid levels. These results suggest that shorter days after opening had a generally positive impact on degree of spoilage.

Pack, but don’t get crazy

Silage density is considered critical to preventing spoilage because lower density silage has more space between particles, which lets air penetrate the silage mass to allow acid-tolerant aerobic microbes to outcompete LAB. The average surface wet-weight density of our low- and high-density piles were 19.5 and 22.5 pounds per cubic foot, respectively. 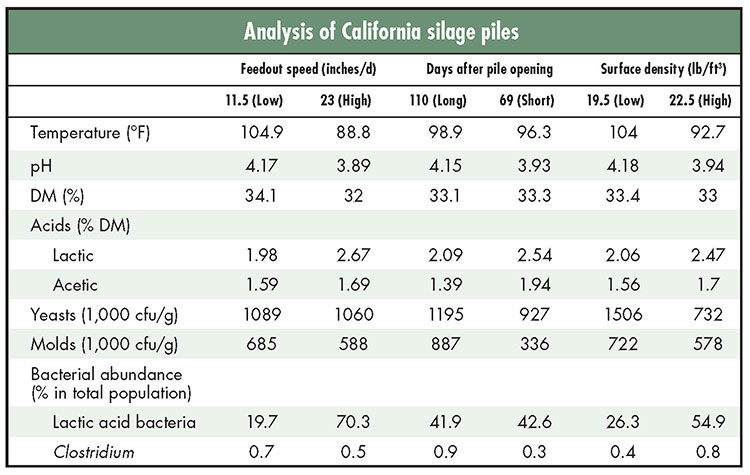 Higher surface density, faster feedout speed, and shorter days after opening were all associated with less spoilage in exposed face periphery silage, albeit to different extents. If piles are to be open for a period exceeding about three months, then it seems likely that spoilage will occur at the exposed periphery of the face unless higher feedout speeds are imposed.

This article appeared in the February 2019 issue of Hay & Forage Grower on pages 30 and 31.

Hit your forage program target Next