By Glenn Shewmaker
The author is a forage extension agronomist with the University of Idaho. He recently attended his 50-year high school reunion and was inspired to reflect.

I was answering a question about a hay steamer and large baler train from a former custom baler when it occurred to me of the incredible changes in equipment, technology, and management for making hay. In the late 1960s, I stacked two-string, 80-pound bales on a bale wagon hitched behind a Freeman baler with a chute that pushed the bales up to waist height. We used a Farmhand loader with a bale fork to transfer 11 bales at a time from four quarters of the wagon to a stack.

Most of our neighbors hired the hay stacked by truck with an elevator along the side. Stacking several layers high on a truck moving through the field was risky work. My high school buddies were paid a half cent per bale, and the truck cost was 2 cents per bale, if I remember correctly. A few farmers stacked on a slip pulled behind the baler and slid off about eight to 10 bales in a bunch, which could then be picked up by a Farmhand grapple . . . I always wanted one of those.

The advantages of the first system were that bales didn’t touch the ground after baling and were immediately off the field and in a stack. The disadvantages were that it took a crew of six: baler driver, wagon stacker, two wagon shuttle drivers, loader operator, and stacker. 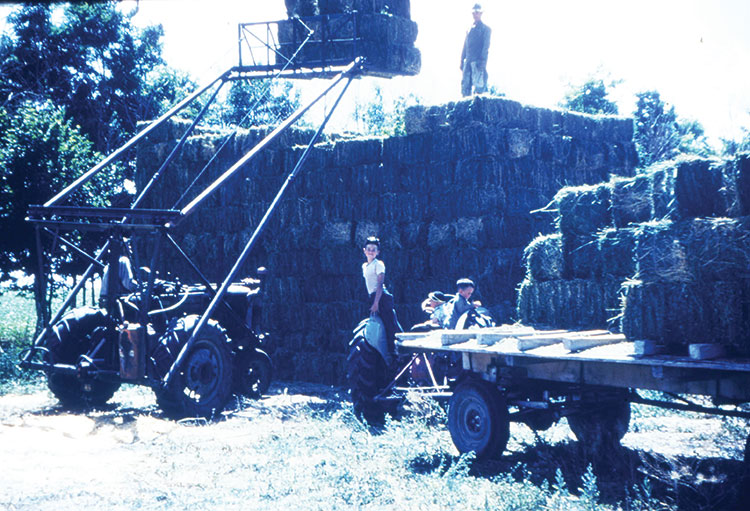 Haying in the late 1950s bears little resemblance to what we witness today.

We would put up about 1,000 bales or about 40 tons in a good eight- to 10-hour day. Another four hours were spent milking, irrigating, and doing other chores. We usually took an hour for a noon lunch with the haying crew with meat, potatoes, pie, a gallon of iced tea, and colorful stories from my dad and uncles.

These days, a 4x4x8-foot baler can spit out about 40 tons per hour, and a truck stacker can roadside it immediately. Essentially, modern baling equipment has about 10 times the capacity of that which was used in the 1960s and requires only two people.

The addition of a steamer and preservative applicator creates an around-the-clock baling window. This equipment also can improve yield and quality of the hay by retaining more leaves and limiting the microbial activity in the hay.

It comes at a cost

A hidden cost is the soil compaction caused by the big iron. You could hang a Ford 8N on the front of a newer, large-framed tractor and it wouldn’t weigh more than the weights and ballast it runs with. I understand that duals on the front and rear axles, along with weights, smooth the ride, but some of this weight is unjustified for haying purposes.

No, I wouldn’t go back to the “good old days” either. Besides, the younger generation has no idea of how to hand stack hay while surviving the truck ride. However, it is good to ruminate over the changes.

Though we’re certainly more efficient than days gone by, we still need to strive to minimize the downside and optimize the advantages of the newer equipment and systems.