Nothing good happens during hay storage 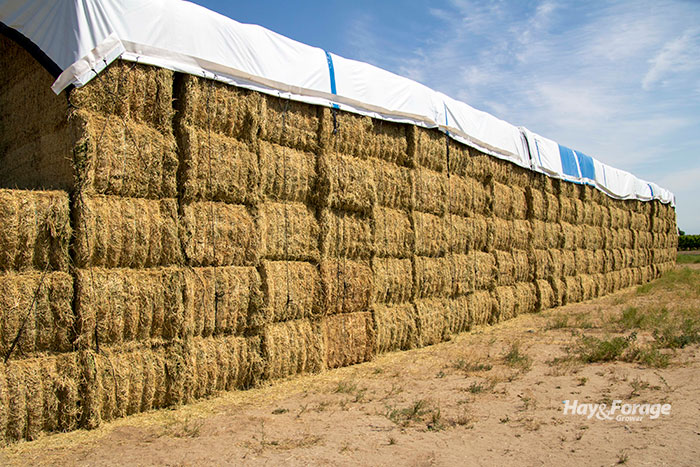 Millions of tons of hay now rest in storage. The quality of this hay will range from the near equivalent of cordwood to leafy rocket fuel.

What we know for sure is that forage quality during storage never improves and can decline substantially, depending on the initial baling moisture and storage conditions.

Although it’s always a good idea to test forage as it goes into storage, it’s perhaps an even better strategy to test hay as it comes out of storage as well. The former offers an indication of what is available in inventory, and the latter allows you to know precisely what is being fed or sold. Don’t expect the in and out forage tests to be the same.

Just how much forage quality will change from pre- to post-storage largely depends on the moisture content at baling and if the hay is stored indoors or outdoors. Further, if it is outdoors, has there been some effort been made to protect it from the weather elements?

Across the U.S., weather conditions and bale types vary dramatically. Let’s begin in the arid West where large square bales are often baled at moisture levels at 12% or lower. It’s not uncommon for bales to be stored outdoors in stacks.

According to Glenn Shewmaker, former extension forage specialist at the University of Idaho, even this dry Western hay is still subject to minor heating, and dry matter losses in the range of 5% are common over a six-month storage period.

When hay is either baled at higher moistures or wetted during storage, forage quality losses from respiration and heating begin to mount. Respiration results in lower forage quality by reducing the amount of nonfiber carbohydrates (sugars and starch). This raises the percentage of fiber fractions and may actually cause crude protein levels to rise. Excessive heating causes usable protein to decline as amino acids and sugars bind to form insoluble nitrogen compounds. This is often referred to as caramelized forage, which offers no feeding value.

Even with hay baled at a moisture level of 8% and tarped in stacks, Shewmaker has documented forage quality losses during storage of up to 5.3 percentage unit increases in acid detergent fiber (ADF). That same stack lost about 10 points in relative forage quality (RFQ).

For uncovered stacks, Shewmaker notes that, once wetted, a bale does not easily shed water. The outer 2 to 3 inches of the bale may increase in moisture by as much as 120%. A 1-inch rainfall adds about 20 gallons of water to a 4-foot by 8-foot bale surface.

Finally, Shewmaker cautions about dry hay touching damp soil or concrete surfaces. Dry hay easily wicks moisture, and the bottom bales can account for up to 50% of the total dry loss in storage.

Whatever weather hay-storing challenges exist in the West, they can be multiplied by a factor of 10 for the Midwest and East, where hay is generally baled wetter, experiences more precipitation events during storage, and generally exists in more humid conditions.

In the eastern U.S., large and small square bales are rarely seen stacked outdoors, covered or not. The same cannot be said for large round bales, and this is where double-digit dry matter and forage quality losses occur for all of the same reasons they do in the West.

Although barn storage is often a worthwhile economic investment, the popularity of outdoor storage can’t be ignored. Extensive research has been done to determine how outdoor storage dry matter and forage quality losses can be minimized simply by choosing a well-drained location and storing bales in the proper orientation.

As a hay industry, we can do a better job of preserving what is harvested. Let’s make that a goal as we head into 2021.