Alfalfa weevils are on the prowl Although spring brings with it many welcomed signs, one that is not included in that group is alfalfa weevil activity. Already, several states are reporting weevil adult and/or larval activity.

“Young alfalfa weevil larvae cause pin hole-sized damage to leaves near the tips of plants, often on unfolded leaves,” notes John Tooker, a professor of entomology at Penn State University. “Older larvae consume leaves that are more open, typically leaving jagged edges. Much of this early season feeding does not result in economic loss, but it is good to recognize the damage and be aware of which fields have greater activity,” he adds.

Fields with larger populations early in the season are most likely to develop economically significant populations. Even so, Tooker says that the majority of fields will not require an insecticide application.

The most prudent approach in dealing with alfalfa weevils begins with field scouting and quantifying current infestations. It is not advised to simply spray blindly.

“Economic thresholds for alfalfa weevil are determined from the size of plants, the value of the hay, the cost of insecticidal treatment, and the number of larvae per 30 stems of alfalfa,” Tooker says of their approach to weevil control in Pennsylvania.

To sample weevil larvae, he suggests to systematically select 30 stems from across a field and shake them into a bucket. If the number of larvae exceeds the threshold, a treatment could be warranted. The threshold limits are quantified in the table below. 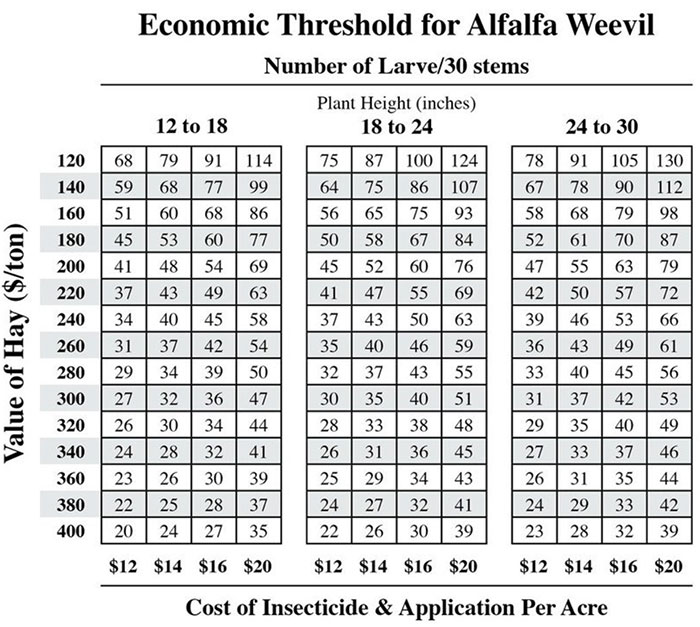 As plants grow and reach 16 inches in height, Tooker advises to harvest the crop rather than spray an insecticide if economic populations are reached. An added benefit to this strategy is that it conserves beneficial organisms that would likely be killed by an insecticide treatment.

Entomologists with the University of Nebraska note that fields with high numbers of active alfalfa weevil larvae at the time of first cutting need to have plant regrowth monitored closely. Alfalfa weevil larvae can consume the regrowth as fast as it develops. If fields aren’t greening up at a normal rate, and if larvae are found, an insecticide application may be warranted.

The bloat watch is on Next