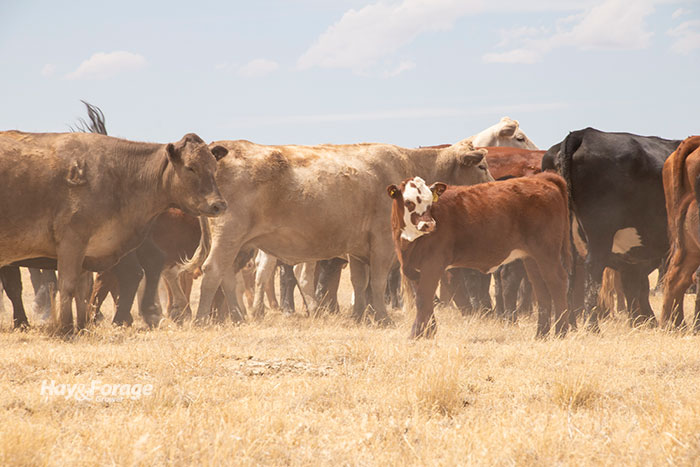 A lack of moisture is something that must be planned for, not reacted to. Without a plan, pastures often suffer severe overgrazing, which results in both short- and long-term damage.

“Without available soil moisture, utilizing trigger dates to compare current precipitation to normal trends will be increasingly important,” notes Ben Beckman, a University of Nebraska extension educator based in Hartington.

Cool-season grasses, which initiate growth earlier in the year, will be more impacted by a lack of early spring moisture. Pastures with primarily warm-season species may be able to stay productive longer until moisture returns because their primary growth won’t occur until early summer, Beckman explains.

“If moisture remains limited, we can expect productivity from pastures to suffer,” Beckman says. “Drought plans should be implemented to reduce stocking rates and limit the potential for overgrazing. Overgrazing during drought can be particularly hard on plants as one stressor in the form of drought is stacked on top of another — grazing. This puts plants in a difficult position to recover,” he adds.

Both grazing and drought limit a plant’s ability to photosynthesize. To compensate for grazing, plants reduce their energy needs by shedding portions of their roots and/or aboveground growth. This temporary condition still allows plants to recover.

“During a drought, no water means no regrowth,” Beckman says. “Faced with no way to right the imbalance of energy supply and demand, the entire plant goes dormant.”

While energy use during a drought is as low as possible, a dormant plant slowly uses its reserves to stay alive.

These core reserves are what the plant needs to initiate growth when growing conditions improve. As the energy sources dwindle, the ability of the plant to recover declines and recovery time is extended. “This same phenomenon occurs with chronic overgrazing, which causes a slow and steady eating away of the plant’s core reserves,” Beckman notes.

To ensure long-term productivity, perennial grasses focus on building back energy reserves and roots before returning above-ground production to prestress levels. If plants continue to be stressed by enduring drought or overgrazing, the resulting time to build back vigor can sometimes take years, Beckman explains. “Even when favorable conditions return after a drought, productivity across the pasture continues to be suppressed.”

Under drought conditions, stocking rates are often reduced. When rain returns, Beckman says it’s often tempting to return to normal stocking rates. This usually results in yet another round of overgrazing. “Under these conditions, it is easy to fall into a vicious cycle where recovery takes longer and longer while overgrazing becomes easier,” he cautions.

Reduced plant vigor also opens the canopy and provides space for weedy species to invade. Some species might provide additional needed feed, but there is also the possibility of invasive weed encroachment.

“Understanding the impact of drought on your pasture can provide direction for planning mitigation strategies,” Beckman asserts. “Planning can reduce the long-term impacts on pastures and help make decisions easier when drought conditions persist.”

Be ready to move on cereal forage harvest Next