The round bale conundrum 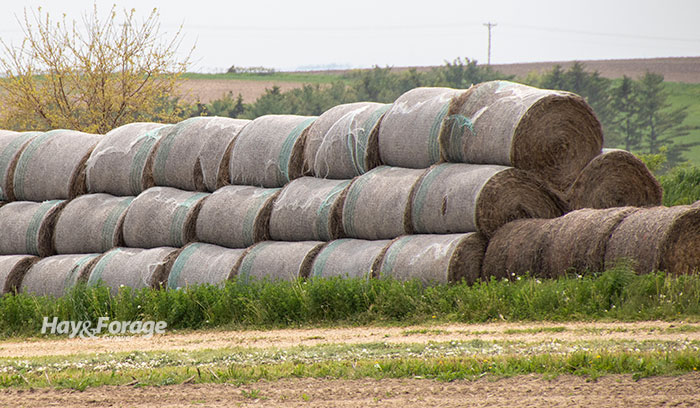 One of biggest advantages of large round bales is that they can be stored outside with minimal dry matter losses. One of the biggest disadvantages is that they can be stored outside and suffer significant dry matter losses. There lies the conundrum.
It’s the owner of the large round bales who decides on which side of the ledger they want to live.
Unless you’re in an extremely arid region, it’s widely accepted that bales of a rectangular shape need to be stored either in a shed or under a tarp. Not doing so results in considerable precipitation damage. Almost all haymakers abide by the covering rule for bales of a something-other-than-round ilk.
Conversely, the storage abuse being imparted on round bales is still a big problem in the industry. A short drive down any country road proves that point.

I was recently on a social media site where one hay producer was touting his recently harvested plethora of large round bales. These bales were lined in multiple rows that were side by side with one row crunched tight against the next — a fire hose, shooting over the top, wouldn’t have been able to get water to the ground. The rows of bales could have been featured in the Guinness Book of World Records as the world’s largest sponge.
Unfortunately, the storage approach described above is not uncommon. The same can be said for uncovered pyramid stacks. To evaluate the impact of these bale orientation approaches, South Dakota State University’s Sara Bauder and her colleague’s measured the moisture content of bales stored in various orientations. A detailed account of the study was reported in the March 2020 issue of Hay & Forage Grower. The figures below show results for the tight side-by-side method and the pyramid stack. Note where the moisture accumulation occurs. 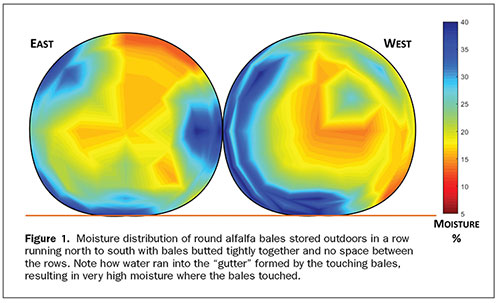 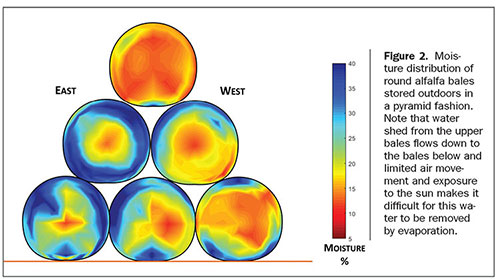 A further and equally important consideration is to site bales in a well-drained area. Regardless of the bale storage orientation, bales readily wick moisture from the ground. This is shown in the graphic below from the South Dakota State study. 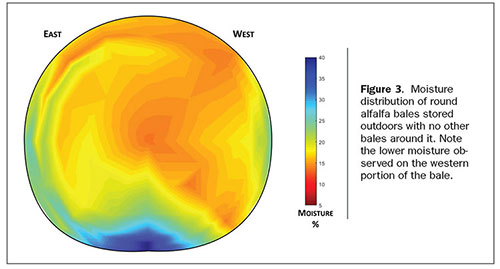 Moisture accumulation in dry hay results in a loss of forage quality and dry matter. With current record-high hay prices, storage losses have never been as costly as is currently the situation. The good news is that changing the orientation of stored hay costs little to no money. Even the cost of a tarp for a pyramid stack is minimal compared to the value of losses incurred in an uncovered pyramid.
Storage losses accumulate pretty quickly when you consider that the outer 4 inches of a 5-foot diameter bale account for at least 25% of the bale’s dry matter. Research studies have documented dry matter losses on outside-stored bales from less than 10% to over 30%.
Best management practices for storing round bales outdoors are well known and proven effective. Still, we see far too many situations where the rules are broken.
Here's a quick refresher on how to limit your losses:
• Net wrap is more effective than twine of any type. Aside from a shorter wrapping time, net-wrapped bales shed water better, and research documents that dry matter losses will be cut by about one-third compared to twine. Fortunately, net wrap has become the standard for the industry.
• Make dense bales — it’s a no-brainer that they shed water better. Perhaps more importantly, they sag less so that there is reduced bale-to-soil contact (if stored on bare ground). Much of the storage loss occurs on the bottom of the bale.
• As with real estate, location is important for outdoor bale storage. A rock base is ideal, but if that's not practical, select an area that is well drained and subject to good air movement. A gentle south-facing slope is preferred. Some farmers store bales on wooden pallets. Never store bales under or along a tree line where drying rates are slow.
• Place bale rows parallel with the slope. Rows stacked across the slope act as a barrier to water movement. Run bales in long north-south rows. This orientation allows for maximum drying.
• Tightly place bales end-to-end, especially if you’re in a region where snow accumulates. This reduces end spoilage and keeps snow from packing between bales. Reducing end spoilage by 2 inches per end per bale saves the equivalent of a 5-foot-wide bale of hay for every 16 bales in the line.
• Leave about a 3-foot space between bale rows to enhance air movement and drying.
• Allow a thatch to form. The thatch layer that forms from oxidation on the outside layer of bales helps shed water and protect the inner layers.
• A growing number of producers are wrapping their dry round bales with an in-line wrapper. This can be cheaper than building a hay shed while still protecting bales from weather elements.

Ditch and CRP hay may offer oxygen Next