Bale grazing in the Bluegrass State 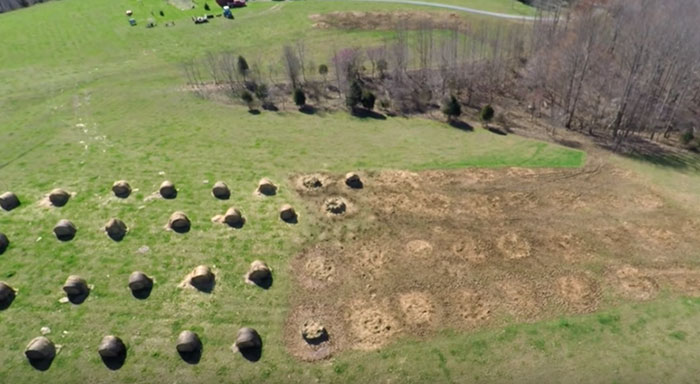 Winter feeding baled hay is a necessary evil once pastures go dormant. Strategies to feed baled hay are as numerous as the number of forage species being fed. One such alternative is referred to as bale grazing.

“Bale grazing entails placing an organized pattern of hay bales in a field,” says Jeff Lehmkuhler, extension beef specialist for the University of Kentucky. “Such a practice allows for a more uniform distribution of nutrients derived from manure, urine, and wasted hay.”

The usual approach to winter feeding is to designate a sacrifice area where hay is fed over the entire winter. By doing so, nutrients are concentrated in one area and forage production is compromised for much of the following growing season. The advantage of using a sacrifice area is that damage to the soil and plant persistency is limited to a defined area.

In a recent edition of Kentucky Forage News, Lehmkuhler explains bale grazing can be successful if temporary fencing is used to provide access to a row of hay bales while preventing contact to other bales until they are fed.

“Using hay rings is not required, but they will help reduce the amount of hay loss,” Lehmkuhler says. “Bale grazing will improve subsequent pasture and hay production through better nutrient recycling and lower purchased fertilizer needs,” he adds.

According to the beef specialist, bale grazing is best suited to climates that are very cold, where the soil remains frozen, or in the western U.S. where there is less winter precipitation and soils remain relatively dry.

Kentucky falls into neither category, but Lehmkuhler says there are a few of his state’s beef producers implementing the practice. One producer’s experience with bale grazing has been documented on a video that can be viewed below.