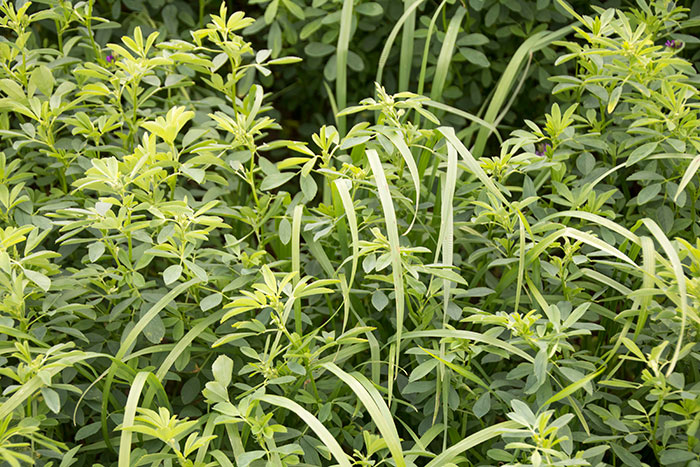 The primary negative impact of seeding grasses with alfalfa is not lower forage quality, but rather variable forage quality, according to Cornell University forage researchers.

As for a grass partner in alfalfa stands, Cherney remains high on meadow fescue. “Though primarily grown for pasture in recent decades, meadow fescue has considerable potential in mixture with alfalfa,” Cherney asserts. “The grass has higher fiber digestibility than most other grasses, consistently 2 to 4 percentage units higher than tall fescue.”

Cherney thinks that meadow fescue in combination with reduced-lignin alfalfa varieties has the potential to produce very high-quality forage for lactating dairy cows. He adds, “A somewhat reduced yield potential for meadow fescue may actually be advantageous for alfalfa-grass mixtures, where a modest grass percentage is desired.”

The Cornell forage specialist suggests seeding 12 to 15 pounds per acre of alfalfa seed along with 4 to 5 pounds per acre of meadow fescue. Once established, Cherney says to cut fields four times per year (where possible) and leave a 4-inch stubble height, perhaps a bit higher for the last cut of the season.

Cornell research results from 2016 field trials indicate that the optimum grass percentage in alfalfa-grass stands at the end of the seeding year may be around 5 to 15 percent, with about 20 to 30 percent in the first production year. “Even 10 percent grass can still result in significant improvements in fiber digestibility,” Cherney says. “Switching from a lower quality grass to a higher quality grass such as meadow fescue may impact forage quality as much as a switch to a reduced-lignin alfalfa,” he asserts.

“Grass crude protein content is greatly impacted by the grass percentage in the stand,” Cherney explains. “As the amount of alfalfa in a stand declines, this reduces the total supply of available nitrogen for grasses, lowering the crude protein content.” Even so, he feels a mixed stand with up to 40 percent grass is still likely to have a reasonably high protein content.

An economical protein supplement Next