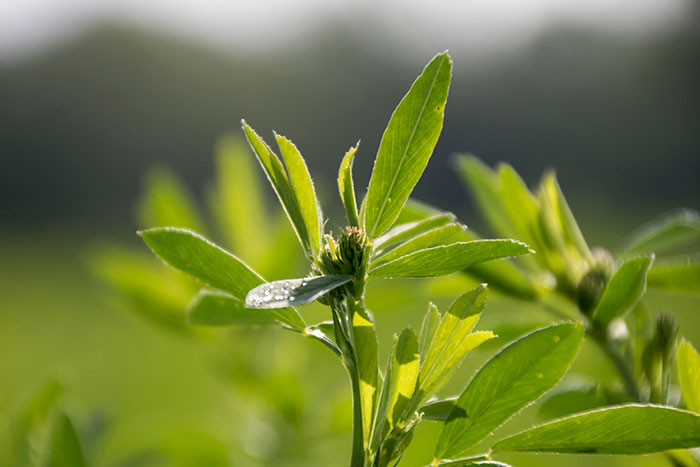 The importance of supplementing low-quality forages or winter pastures with protein is backed by significant research data and farmer experience. However, protein supplements are often expensive.

Forage analyses will determine whether the feedstuffs are deficient in protein. When sampling hay, take a core sample from several bales in the stack. When sampling pasture, choose higher quality portions of plants that animals are likely to select rather than harvesting entire plants to ground level.

In SDSU extension’s newsletter, iGrow, Olson says that the general rule of thumb is low-quality forage contains 7 percent crude protein or less. If crude protein falls below that amount, the rumen microbial population will not be large enough to digest dietary fiber.

Meeting the animal’s demands is the next requirement. A beef cow in midgestation will need protein at about 7 percent of the diet. When it enters the last trimester of gestation, that number will grow to about 8 percent.

“Alfalfa hay makes an ideal protein supplement,” Olson says. The protein in alfalfa is highly digestible and available in the rumen to feed the rumen microbes, stimulating digestion of fiber in both the alfalfa and the lower quality forage. This also enhances intake of the forage, which improves the total digestible nutrients that the cow receives.

The alfalfa provided a similar stimulus in digestion and intake of the low-quality forage, as well as similar cow weight and body condition score through the winter. It also yielded a slightly higher pregnancy rate the next fall, at 96 percent for alfalfa hay and 88 percent for the cake.

He notes that additional research at Oregon State University showed that the quality of alfalfa hay is relatively unimportant, as long as more alfalfa is fed when quality is lower in order to meet the protein needs.

“Please bear in mind that this is not suggesting a diet consisting of only alfalfa hay,” Olson says. A few pounds are fed to overcome the protein deficiency, but the cow is expected to fill the rest of its daily intake needs with the low-quality forage.

To determine if alfalfa hay is the most cost-effective protein supplement, consider the cost per ton of protein. For example, assume that alfalfa hay with 18 percent protein costs $90 per ton and a 20 percent protein cake costs $180 per ton. The cost per ton of protein is $562 for alfalfa and $1,059 for the cake. These calculations are made on a dry matter basis assuming the dry matter content for alfalfa hay is 89 percent and cake is 85 percent.

Olson notes that if you produced the alfalfa hay, it can be priced at the cost of production, which will usually be favorable compared to the cost of purchased feedstuffs.

The lowdown on January planting Next