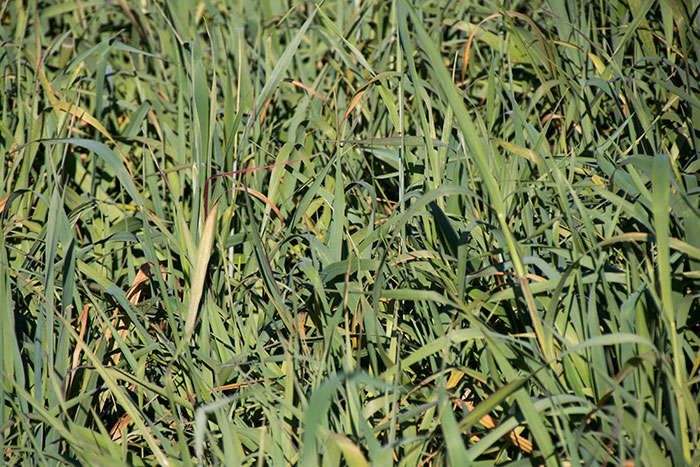 Cool-season annual forage crops are grown throughout the South to minimize the amount of stored forage that needs to be fed. To extend the grazing season, small grain cereal grasses such as rye, oats, triticale, and wheat can provide a valuable complement to other winter annual grasses.

Rocky Lemus, Mississippi State University extension forage specialist, notes that in a pure stand, high seeding rates of cereal grains should be used to ensure an adequate stand and reduce stem size. This is especially true if you’re planning to harvest hay, since the smaller stem size can improve wilting speed and drying time.

If small grains will be mixed with annual ryegrass or legumes, then reduce seeding rates by 20 to 30 percent of the recommended rate.

“Small grains can also serve as emergency crops under uncertain weather because they have excellent seed vigor, can be seeded earlier in the fall, and provide superior pasture in the fall and early spring,” Lemus says in his newsletter, Forage News.

Oats have the potential to produce higher yields than wheat and triticale. In Mississippi forage trials, average oat yields were higher than wheat. Oats are adapted to well-drained clay or sandy loam soils but also can perform in wet conditions.

In northern Mississippi, oats can be winterkilled. Therefore, fall plantings are best adapted to the central and southern parts of the state. Forage oat varieties are typically more late maturing than those used for grain, and Lemus notes that the crop has poor grazing tolerance.

Another option is rye. “Rye is considered one of the most cold tolerant small grains and can be productive in a wide range of soil types,” Lemus says.

It produces quick forage growth in the fall and spring when planted early. Though it is an early maturing crop with the potential for becoming stemmy and unpalatable by midspring, rye often offers more consistent forage production and is more tolerant of acidic soils than wheat.

The crop’s tillering ability helps compensate for wide variations in plant population densities. As a result of its early maturity, rye may be overseeded into warm-season perennial grasses such as bermudagrass and bahiagrass without competing and delaying green up in the spring.

Triticale is a cross between rye and wheat and is adapted to a wide range of soil types; it typically yields less than the other small grains. Triticale has better tolerance to low soil pH than wheat but also has lower forage quality. Due to its large stems, drying for hay production in the spring can be difficult.

One disadvantage of wheat is poor forage production in the fall; however, it can be higher quality forage than oats, rye, and triticale. Wheat is less tolerant to poorly drained soils than rye or triticale.

When using wheat as forage, Lemus warns that planting too early in the fall can make it susceptible to mosaic, barley yellow dwarf virus, and Hessian fly. Since wheat has excellent winterhardiness, it may be planted later in the fall than other small grains.

“Small grains can provide a good source of high-quality forage to livestock from fall to early spring if weather permits,” Lemus says.

To avoid plant damage from defoliation, the forage specialist suggests that grazing be delayed until a strong secondary root system is well established and plants are 6 to 8 inches tall.

In early spring, small grains are typically lower in mineral content due to faster growth. A lack of magnesium raises the risk of grass tetany in grazing cattle, therefore it is recommended to provide a mineral mix containing higher levels of magnesium, especially to cows that recently calved or are near calving.

Also, if small grains were fertilized close to grazing, a risk for nitrate poisoning exists. It’s recommended to apply nitrogen once plants have reached 3 inches and at least three to four weeks before the intended grazing period.

To conclude, Lemus emphasizes the importance that cereal forages can play in a year-round grazing plan. “They offer a lot more utility than just an emergency forage source,” he says.

Rotational grazing changed everything Next