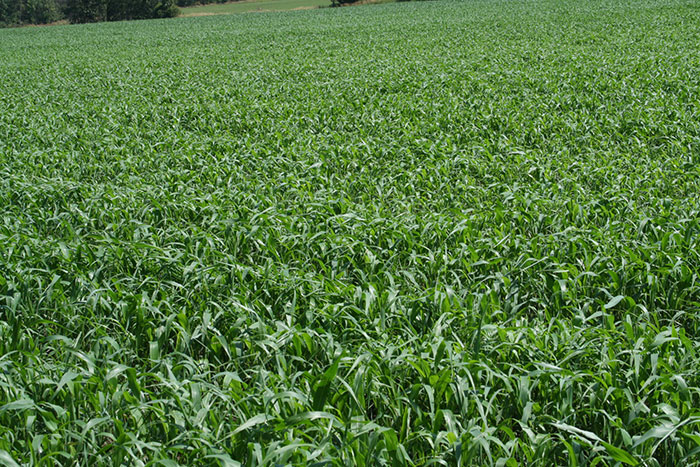 Unfortunately, most of the country is not blessed with a climate that allows one specific grass to thrive year-round. Adaptive as always, producers are able to get around this by growing both warm- and cool-season grasses to cover their seasonal bases.

Given that the summer slump will soon be upon us, Mike Estadt, extension educator for The Ohio State University, highlights sudangrass as a potential “slump buster” in a recent issue of the Ohio Beef Cattle Letter.

Sudangrass, smaller and finer stalked than the subtropical East African species it is derived from, looks more grass-like and produces more leaves than forage sorghum. Although Estadt states that total biomass will typically be less than that of forage sorghum, sudangrass is largely used for hay production and grazing.

Estadt notes that some of the new hybrid sudangrasses now have the brown midrib-6 gene, which lowers the lignin content to improve digestibility and palatability for ruminants.

Estadt advises that sudangrass be planted at a 1-inch depth with a no-till drill at 35 pounds per acre when the soil reaches 60°F. Apply nitrogen based on planned growth at 1 to 1.25 pounds per day of planned growth.

“For best quality and yield under multiple grazings, harvest at 40 days or 40 inches of growth, whichever comes first,” Estadt says.

Sudangrass is typically grazed 45 to 55 days postemergence. To encourage tillering and thickening of stands, Estadt recommends leaving 2 nodes or 6 inches to allow for faster regrowth. The most effective way to achieve this is through strip grazing. He cautions that following a killing freeze or nitrogen application prior to drought conditions, prussic acid may build up in sudangrass. In such cases, postpone grazing for at least one week.

From his own experience, Estadt listed costs of $30 per acre for seed, $50 per acre for fertilizer at seeding (including 50 pounds per acre of nitrogen), and a planting cost of $10 per acre.

He reported that after grazing, 56 of his mature bred fall calving cows for three days on 5 acres 41 days after planting, his cost was roughly 53 cents per cow per day.

An additional 50 units of nitrogen was then applied after the animals were removed. Within 15 days postgrazing, Estadt notes that the grass had tillered out and grown 16 to 18 inches. The cost of five additional days of grazing in late August was less than 20 cents per day after fertilizer costs were considered.

Buy or bale? Next

Not all thistles are created equal Previous