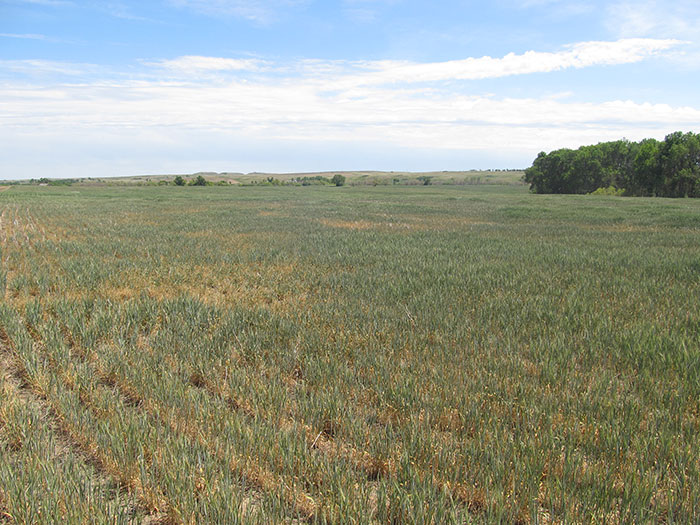 Dry conditions in the High Plains have livestock producers on high alert for possible livestock nitrate poisoning. Extension specialists at North Dakota State University (NDSU) were quick to offer advice in a recent news release on the prevention of nitrate poisoning induced by drought conditions.

Livestock are at a higher risk during droughts due to the consumption of drought-stressed forages. These forages accumulate nitrates when environmentally stressed, with buildup also influenced by soil conditions and plant vigor.

“If producers are considering utilizing low-yielding crops as livestock forage, they should be tested for nitrates prior to feeding,” Sedivec warns.

It is important to know the role water plays in nitrate accumulation when continuing to graze drought-stressed pastures or fields. Livestock Environmental Stewardship Specialist Miranda Meehan notes that not all drought conditions cause nitrate poisoning and that high nitrate levels cannot be obtained without moisture.

“Some moisture must be present in the soil for the plant to absorb and accumulate nitrate. In plants that survive drought conditions, nitrates are often high several days following the first rain,” Meehan says.

For those preparing to turn livestock out, fields that appear fried by drought conditions might actually be a good option. Cereal crop fields that are exceptionally dry may be so stressed that they are beyond nitrate accumulation without rain.

“Plants have to be in active growth stages to take up nitrogen from the soil,” says Carl Dahlen, beef cattle specialist. “Nitrate hot spots in fields have had moisture, so they are stunted in growth but typically look very lush and green. Stress during the period from plant joining to heading is associated with more nitrate accumulation. Fields that had nitrogen fertilizer applied are also more susceptible.”

Though rangelands rarely have nitrate problems, broadleaf plants such as pigweed, kochia, and Russian thistle can produce nitrates and are often consumed by livestock.

The specialists further explain that higher nitrate concentrations occur in the lower parts of the plants. Usually stalks and stems pose the greatest risk while leaves, seeds, and flowers contain very little nitrate. Because of this, poisoning can potentially be avoided by cutting at or grazing to a height of 6 inches.

“Ruminant animals, such as cattle and sheep, are susceptible to nitrate poisoning because their digestive process converts nitrate to nitrite, which in turn is converted to ammonia,” shares Janna Kincheloe, livestock systems specialist. “When nitrate levels are high, the nitrite will accumulate and be absorbed by red blood cells, reducing their ability to transport oxygen.”

Kincheloe continues to say that this condition is very rare in horses because while they, too, perform the same reaction in their hindgut, it is at a much lesser extent.

Nitrate poisoning is characterized by lack of oxygen in the blood, with acute poisoning occurring from half an hour to four hours after the consumption of toxic levels of nitrate. Symptoms occur quickly and include bluish/chocolate brown mucous membranes, rapid or difficult breathing, rapid pulse, salivation, bloating, tremors, staggering, dark chocolate-colored blood, weakness, coma, or death.

Abortions may occur roughly 10 to 14 days following poisoning due to cutting oxygen off to the fetus.

“The best way to prevent nitrate poisoning is to control the type and quantity of forage offered to livestock,” the specialists say.

Recommendations for preventing nitrate poisoning include avoiding or diluting forages that are high in nitrates, feeding dry roughage first to fill animals up before grazing, and making sure that sample cores of bales are representative of the entire field.

Meehan advises not to overstock pastures as it raises the consumption of lower parts of the forage that are higher in nitrate.

Small grain forages can be spared up to half the nitrate content by chopping and ensiling, adds Dahlen. Silage must ferment at least 21 days and be tested before feeding.

Samples that are representative of the field or bales in question can be sent to laboratories for testing. For more information on nitrate poisoning, go to NDSU Extension’s publication Nitrate Poisoning of Livestock.