Hot hay can ruin your day 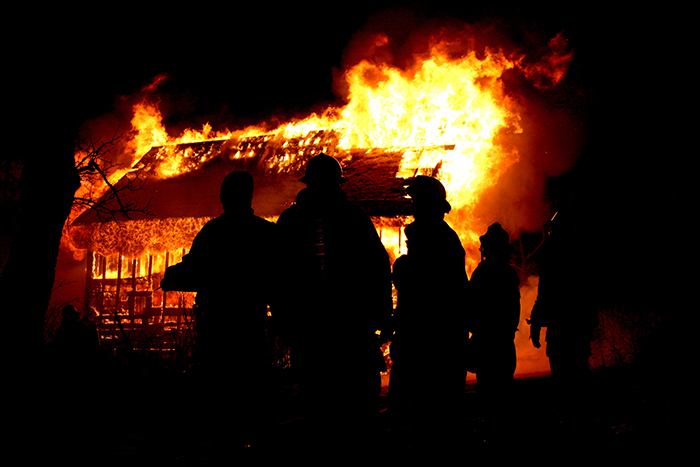 Barn fires never happen, until they happen. While racing the rain and harvesting that last cutting may be cause for celebration, hold the applause for a few weeks. Hay that is cut and baled with high moisture is at risk for spontaneous combustion for up to three weeks as the plant cells are still respiring.

“When baled at moistures over 20 percent, mesophilic (warm temperature) bacteria release heat, causing temperatures to reach between 130°F and 140°F,” says Jason Hartschuh, extension educator for The Ohio State University in a recent C.O.R.N. newsletter. “If bacteria die and bales cool, you are in the clear, but if thermophilic bacteria take over, temperatures can rise to over 175°F.”

Although temperatures of 110°F are common the first five days after baling, Hartschuh recommends using a hay temperature probe to monitor the internal temperature for the three-week window post-baling. Bales at risk should not be stacked and should be kept outside or in an area with adequate ventilation to assist in drying.

Hartschuh describes higher risk hay as having moisture levels above 20 percent and without the use of a hay preservative. Also be cautious of hay coming from fields with wet spots or uneven drying. Most fires occur within the first six weeks after baling.

Check at-risk hay twice a day until low temperatures stabilize. Monitor internal temperatures at the center of the stack, or around 8 feet down in larger stacks.

A probe thermometer can be made by using a 3/4-inch pipe with the ends closed into a point and 3/16-inch holes drilled into the bottom 4 inches, explains Hartschuh. A thermometer can then be lowered into the pipe on a string and left inside the stack for 15 minutes for an accurate reading.

Another method to determine fire risk is by sticking a 3/8-inch pipe into the stack twice a day. If it is too hot to hold, hay is at risk for fire.

Take proper safety precautions when checking hay. Using planks to disperse weight can help prevent falling into burned-out cavities. If a harness is not readily available, make sure there are people nearby to help monitor the situation.

“Hay bale temperatures of 120°F to 130°F will likely result in mold growth and will make the protein in the hay less available to animals,” Hartschuh says.

While these temperatures will not cause fires, continued mold growth can raise temperatures to dangerous levels. At 160°F to 170°F, there is cause for alarm and the fire department should be alerted immediately.

“At those elevated temperatures, other chemical reactions begin to occur that elevate the temperature much higher, resulting in spontaneous combustion of the hay in a relatively short period of time,” Hartschuh says.

When the haystack temperatures exceed 170°F, safely evacuate any livestock or machinery that are located in the same barn. Call the fire department before trying to move hay.

Seek cover and forage Next