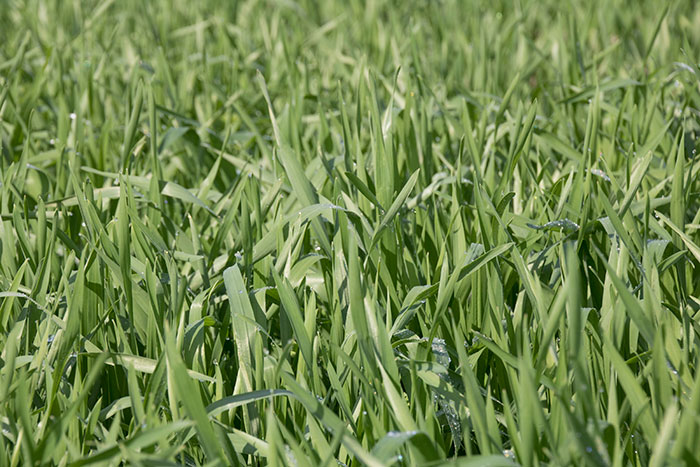 Although not always apparent, research has shown that cover crops are beneficial in providing nutrients to the soil, regulating temperature, and retaining water and soil organic matter. The economic value of cover crops has not been researched as thoroughly.

“It is difficult to generalize how cover crops will perform from location to location and what the cost and revenue figures might look like, especially when used as a multispecies grazing crop,” Johnson says.

Factors such as soil health value, water retention, and the setting in which crops are planted and used make it difficult to determine a value. Johnson and Goodwin evaluated two economic scenarios in which grazing cover crops can easily fill forage production gaps in the Southern Great Plains.

After harvesting wheat, a cover crop was seeded and 500-pound stocker calves grazed it for 70 days, gaining 140 pounds at a rate of 2 pounds per day. The cost of the additional crop came in at around $50 an acre, with $20 for seed, $15 for planting, and $15 for crop burn down. Since this crop was able to support 3.6 head per acre, an estimated 504 pounds per acre were gained among the calves. When the $50 per acre was divided across the 504 pounds per acre gained, this equated to a cover crop cost of 10 cents per pound.

Johnson and Goodwin note that the value of gain would have to be greater than the cost of gain (10 cents per pound) to make this pay off. While these results easily showed a positive net return, further studies are needed to see if this outcome can be replicated. The research did not take animal health costs, labor, or interest into account.

In another study at the Noble Research Institute, initial results indicate lower wheat forage production and weight gains in stocker calves on wheat following cover crops during the first year.

“If we just break even or the cattle don’t gain, we haven’t had a total loss,” Johnson states. “Typically, there may be a summer weed control pass on fallow wheat ground that we have voided while also building soil health.”

Producers may also benefit from cover crops by changing when they market cattle. Johnson and Goodwin share anecdotal evidence that calves grazed on cover crops with their mothers can gain around 3 pounds a day over the summer. They also indicate that weaning might be made easier by just pulling the cows out.

This second grazed cover crop option makes forage available when hay is typically provided. Interseed the cool-season mix at a rate of 50 pounds per acre with 30 pounds of in-row phosphorus at planting. Per-acre costs are $80, assuming $35 for seed, $15 for burn down, $15 for fertilization, and $15 for planting.

For a comparison, Johnson and Goodwin assume one bale of hay per head per month for two months and one acre of cover crop per head for two months. At $45 a bale for bermudagrass, hay costs are $90 per cow. Cover crops come in at $80 per head per cow. This $10 per-cow savings effectively fills the forage gap.

“Some producers may choose to topdress fertilizer on the cover crop in the spring, which would raise the cover crop cost to more than feeding hay. Yet, we haven’t taken into account the reduction of time spent hauling hay, storage costs, or reduction in wear and tear on equipment,” Johnson explains. The cool-season cover crop also comes with the previously mentioned soil health benefits.