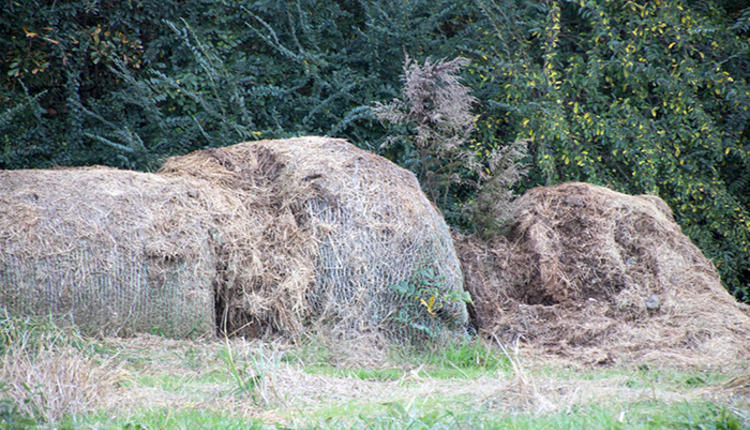 It’s no secret that animal rights activists have caused more than their fair share of consternation for livestock producers over the years. Despite some underhanded methods and often exaggerated claims, there’s no doubt that they have brought animal welfare to the table as a main talking point and farmstead operational focus.

In the end, the general public will better understand that animal care and comfort goes hand in hand with profitability, something most livestock producers strive for.

Fortunately, there haven’t been any round bale activist groups formed.

Sure, we have some shining examples of excellent round bale care in the form of hay barns and neatly arranged end-to-end rows of bales lined on well-drained areas. Unfortunately, there also remain too many examples of round bale abuse.

This abuse is not confined to one region. It’s rampant anywhere that cattle roam the landscape, which is pretty much everywhere in the rural countryside.

You probably know what I’m talking about. It’s those bales that are haphazardly lined up or set singularly along a tree line. It’s the bales stacked like pyramids so that precipitation runs off one bale and onto, then into, the next.

Finally, it’s the many tons of round-bale forage that has endured several presidential terms and now has just been left to Mother Nature’s devices, rotting and becoming more unidentifiable with each passing year. Abuse and loss in its worst form.

I suspect a lot of this hay began its life as “just in case” hay and the “case” just never happened. Unfortunately, poorly located outdoor bales in our humid regions have a shelf life similar to potato salad stored in a car trunk during July. The result is perfectly good hay that is now mushroom-growing medium.

Even though hay barns are easy to pencil into profitability, there will always be copious numbers of round bales stored outside. Outdoor storage isn’t necessarily a bad thing when bales are made, bound, and stacked correctly. What is a forage crime is that we waste so much good forage due to neglect and abuse. Preserving uncovered round bales is not a matter of costing more money, it’s purely a matter of decision making.

As we push into the 2018 haymaking season, let’s give more thought to outdoor bale storage.

Storage losses accumulate pretty quickly when you consider that the outer 4 inches of a 5-foot-diameter bale account for at least 25 percent of the bale’s dry matter. Losses during outdoor storage can range from 10 percent to near 100 percent in worst-case scenarios. To keep losses on the low side, consider the following:

• Most haymakers now use net wrap and for good reason. Aside from a shorter wrapping time, net-wrapped bales shed water better, and research documents that dry matter losses will be cut by about one-third compared to twine. Still, net wrap won’t save a poorly-stored bale.

• Make dense bales; it’s a no-brainer that they shed water better. Perhaps more importantly, they sag less so that there is reduced bale-to-soil contact (if stored on bare ground). Much of the storage loss often comes on the bottom of the bale.

• As with real estate, location is important for outdoor bale storage. A rock base is ideal, but if that's not practical then select an area that is well drained and subject to good air movement. Never store bales under or along a tree line, which simply keeps bales wetter longer and subject to rapid deterioration.

• Tightly butt bales end-to-end. This reduces end spoilage. Reducing end spoilage by 2 inches per end per bale saves about a 5-foot-wide bale of hay for every 16 bales in the line.

• Leave about a 3-foot space between bale rows to enhance air movement and drying.

• Run bale rows parallel with the slope. Rows stacked across the slope act as a barrier to water movement.

The disappearing sickle bar mower Next