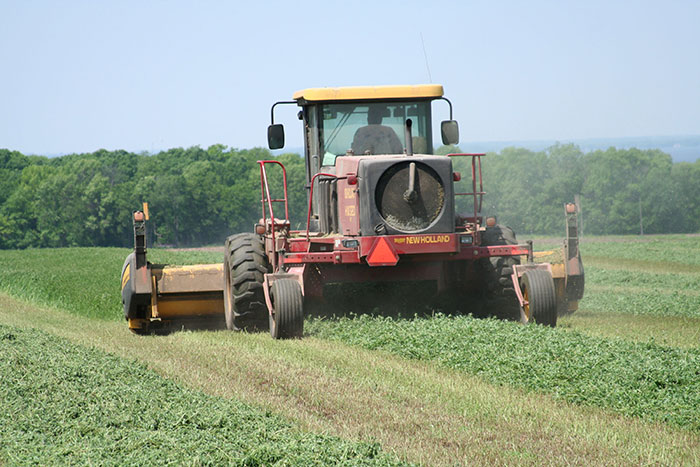 Like many of you reading this, I cut my haymaking teeth spending many summer hours pulling a sickle cutterbar mower, generally over stone-infested terrain. My next move up in the world was riding self-propelled sickle bar mowers, the first of which did not tout an air-conditioned cab — an easy fact to recall even after 40 years.

For those who still operate or once operated a sickle bar mower, you know that part of the drill is replacing broken guards and knife sections while still in the field. This was as an acquired skill, especially when rivets were involved.

I always considered in-field guard and knife replacement to be the equivalent of a NASCAR pit stop — a repetitious act that is wrought with potential failed outcomes or bloody fingers.

These days, the sickle bar mower has become a much smaller feature of the rural landscape. Sure, you can still buy a new or used cutter, but the disc mower is now the preferred option by most haymakers.

Industry experts note that sales of pull-type mowers with sickle cutterbar heads have all but disappeared with well over 90 percent of purchases being disc mowers. For self-propelled units, the ratio of sales is roughly four to one in favor of the disc cutter. Simply put, the whine of the disc mower has mostly replaced the shearing clatter of the sickle cutterbar.

Disc mowers were not without their issues when first introduced to the market. The early machines had linked cutting head gearboxes that could run up a significant repair bill if one decided to go awry and cause damage to multiple others. Knife replacement was also initially difficult. Both of these engineering deficiencies have now been overcome on current disc mower models.

A sickle bar mower often leaves a cleaner cut field, especially in light crops, and is less prone to suck ash (dirt) into the swath or windrow. Finally, repair costs are generally lower if major damage is done to the cutting head.

The disc mower, however, also brings a more impressive list of advantages to the haymaker. Perhaps most importantly, they can be operated at a much faster ground speed, improving operational efficiency. The disc mower does a much better job of cutting in lodged crops and fine-stemmed grasses. Current model versions make it simple to replace knives.

Though ash incorporation into the hay crop may be a problem in some conditions, the use of angled knives has been shown to reduce this issue.

Users of disc mowers have told me that they are more forgiving than a sickle cutterbar mower. A disc mower will continue to cut with dull blades, but plant shearing will be more ragged and the likelihood for plant damage is enhanced. Knives need to be monitored closely and changed at regular intervals.

Cutting height is also important to consider when using a disc mower. Though they are capable of shaving a field, practicing good plant agronomy needs to be considered, leaving a 3-inch stubble for alfalfa and a 4-inch stubble for grasses.

I’m sure some haymakers will always prefer the sickle bar mower, but its days as the dominant cutter of choice are gone. Though this is a win for production efficiency, it’s somewhat unfortunate that many in the new generation of haymakers won’t have the experience of changing a knife section while battling the heat, the reel, and the stubble.

Round bale binding results are in Next