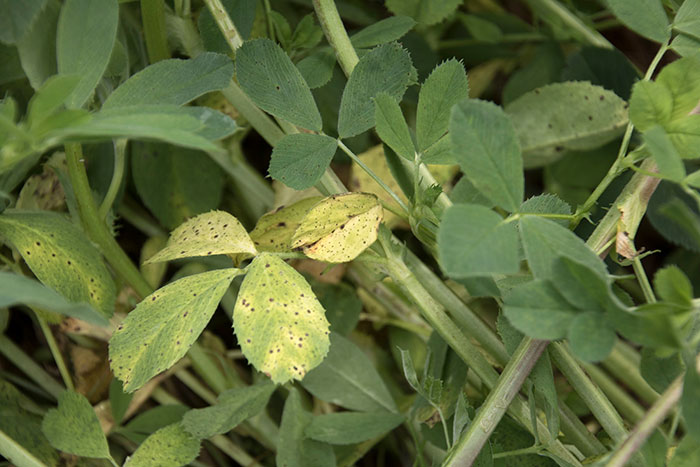 Over the past six years, Iowa State University agronomist Brian Lang has been evaluating the use of foliar fungicides for alfalfa. The effort has resulted in 219 fungicide applications by harvest treatment comparisons, and the summative results were recently published in ISU’s 2018 Animal Industry Report.

Lang reports the following results and conclusions from his work that involved alfalfa plots harvested four times per year:

1. First cutting generally provided the greatest percent yield response for foliar fungicide applications. The researcher found that the spring environment was more favorable for alfalfa diseases, had a higher yield potential than later cuttings, and had an extended growth period.

2. The most value gained came from a foliar fungicide application via dry matter yield rather than forage quality. Lang notes that even though plant visual differences were seen between treatments (for example, improved leaf retention), rarely did this translate to significant improvement in forage quality.

3. Forage value drives the economics of applying a fungicide. It’s much harder to pencil out fungicides with $80 per ton hay compared to $200 per ton hay.

4. Under dry conditions, such as in the 2012 drought year, disease incidence is low and the response to fungicides is reduced.

6. In several alfalfa variety comparisons, Lang found that because cultivars have different levels of foliar disease resistance, some respond more favorably to foliar fungicide applications than others.

7. Overall, the highest probability of economic return from a foliar fungicide comes early in the growing season and when the alfalfa crop value is high. Lang recommends that producers assess their individual situation, taking into account factors such as variety, time of year, environmental conditions, and crop value, before applying a foliar fungicide.

For a complete look at Lang’s research, click here.