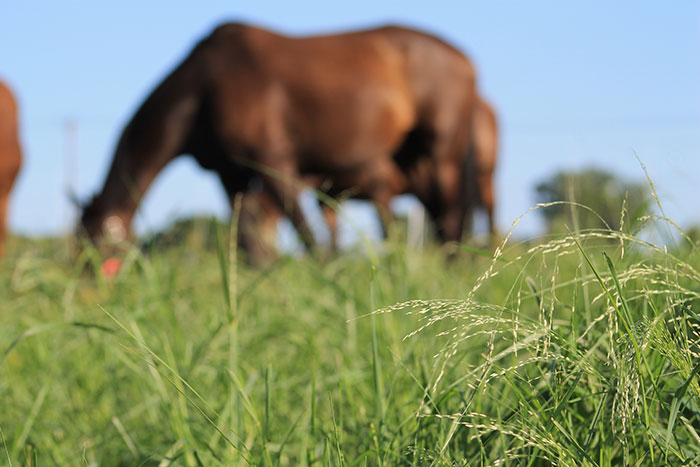 Forages play a crucial role in equine diets, but variability in nutrient content among species can lead to challenges in diet formulation to meet a horse’s nutritional needs. Protein content is one component that varies the most among forages.

“While crude protein (CP) is commonly used to estimate protein content, amino acids are a more accurate measure of protein quality,” explains a new research summary from the University of Minnesota.

Alfalfa, teff grass, and a mix of Kentucky bluegrass and orchardgrass were tested to represent forage legumes, warm-season grasses, and CSGs, respectively.

To evaluate the forages, six aged horses were allowed to graze pastures of each forage. Forage and blood samples were taken before turnout as well as two and four hours after turnout, and then were analyzed for amino acid concentrations.

While higher CP values are associated with higher amino acid concentrations, fiber content is important as it can play a role in the availability of amino acids.

The combination of low CP and high fiber content suggests that teff would have the lowest contribution to horses in terms of amino acids.

For most classes, except growing horses and pregnant mares, the lysine requirement would be met grazing teff at 1.5 percent of their body weight on a dry matter (DM) basis. This indicates that the difference in amino acid content across forages may not be an issue from a physiological and performance perspective.

In the blood analysis, researchers found that the plasma amino acid concentrations did not differ regardless of forage type.

Can alfalfa be grazed during the fall? Next