The tariffs imposed by China on U.S. alfalfa and grass hay imports to that country have already had a significant economic impact on hay growers and export companies. But that may just be the tip of the proverbial iceberg if some resolution isn’t reached soon.

“It’s tough to generalize, but if I had to pick one number, I would say sales are down about 35 percent to China,” said John Szczepanski, director of the U.S. Forage Export Council. “If the situation doesn’t improve soon, we could see (export) sales drop by 50 percent or more,” he added during his presentation at the California Alfalfa & Forage Symposium in Reno, Nev., last week.

“A lot of Chinese customers are walking away from purchase orders and breaking (existing) contracts,” Szczepanski noted. “Further, there are a lot of customers not interested in signing new contracts.”

China, the United States’ leading export partner for alfalfa, tacked on a 25 percent retaliatory tariff that began in July. Since that time, Szczepanski noted that China was relying more heavily on their own hay production and buying hay from countries such as Spain and Bulgaria. 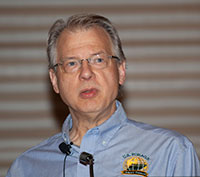 "This represents a serious risk for U.S. exporters because if a customer gets used to and adopts a different feeding system, it’s hard to switch back. That’s the scary thing with this whole situation,” Szczepanski warned.

Though China leads the pack for countries importing U.S. alfalfa, Japan remains the biggest buyer for all hay types. They currently assume 35 percent of our total export hay market, representing about $400 million in export sales.

“Ten years ago, the value of hay exports going to Japan was about the same as it is today,” Szczepanski said. “Back then, however, they represented two-thirds of our total hay exports. Though the Japan market hasn’t grown considerably, they now represent a smaller portion of the export pie because of sales expansion into other countries,” he added.

Szczepanski explained that, similar to Korea, Japan’s government offers subsidies for the use of domestic forage, which impacts the United States’ ability to grow the market.

Chemical residue concerns in hay imports is becoming a big issue for Japan, Szczepanski noted. This is especially the case for clopyralid, the active ingredient in herbicides such as Stinger and Curtail among others.

“Vegetable growers in Japan use a lot of compost,” Szczepanski explained. “Because clopyralid doesn’t break down easily, it can show up in animal manure and ultimately the compost being used on crops such as tomatoes. The chemical can and has caused considerable crop damage,” he added.

The Japanese government is beginning to pay more attention to the clopyralid problem and they’re asking hay exporters to ensure that growers are not exporting hay from fields where the chemical was used during the same calendar year.

Szczepanski emphasized the fact that world markets have changed dramatically in the past 10 years. Both new buyers and suppliers have entered the picture.

“The competition is growing; it’s no longer just Canada and Australia as it once was,” Szczepanski said. “Supplies of hay are coming from all over the world. Countries such as Argentina and those in Eastern Europe are implementing modern production systems. Spain has become an important source of good forage for world buyers,” he added.

For the U.S. to remain strong competitors, Szczepanski noted that it will be important to maintain a good transportation infrastructure.

“Remember that the Chinese market only opened for us about 10 years ago,” Szczepanski said. “India still has many very small scale operations that are not going to buy U.S. alfalfa. But it only takes a sliver of India’s vast market, their forward-thinking dairies, to get started in this market and give us an opportunity for another significant export partner,” he explained.

According to Szczepanski, there is currently interest on both sides for a United States-India hay market relationship.

“We have to keep looking ahead,” Szczepanski concluded.