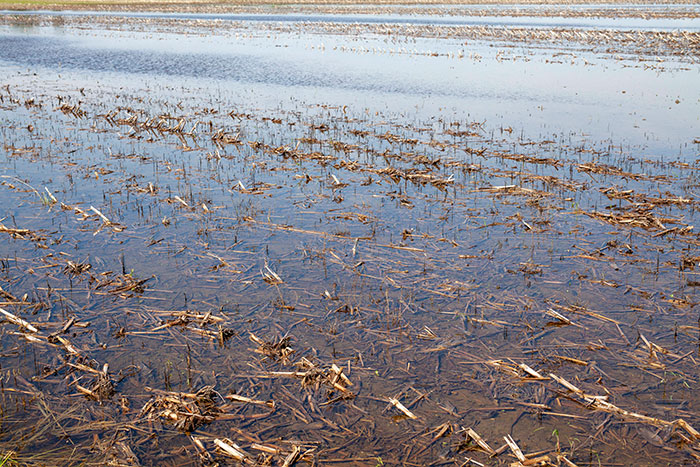 The record rainfall that has impacted a wide swath of the U.S. this spring and early summer has resulted in a large number of prevented planted acres. Many grain farmers, and no doubt some dairy and beef producers, have chosen to take a full or partial prevented planting payment under the federal crop insurance program.

When taking a full prevented plant payment, farmers are allowed to plant a cover crop, but it previously couldn’t be harvested until after November 1 and then only as grazed or baled feed.

As a result of recent emergency legislation, new insurance program rules dictate that farmers can now opt to plant a forage crop after their designated final planting date and harvest it on or after September 1. Further, now a cover crop can be baled; cut for silage, haylage, or baleage; or grazed.

The following chart from the University of Nebraska sorts out the various options in terms of planting time and payment levels. 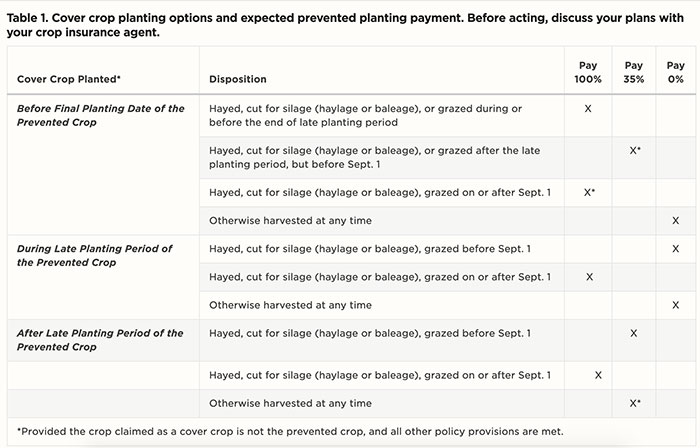 Moving the harvest date up by two months not only opens up a wealth of options, it also helps to ensure that higher quality forage can be harvested. Additionally, it will be much easier to keep the forage from enduring multiple frosts before harvest in many states.

Word on the street is that traditional annual cover crop (forage) species are hard to come by given the high demand. This means farmers will have to get creative.

The Risk Management Agency (RMA) does not have an official list of approved cover crops. RMA states that “For crop insurance purposes, a cover crop is a crop generally recognized by agricultural experts as agronomically sound for the area for erosion control or other purposes related to conservation or soil improvement.”

This means it will be important to check with your insurance agent and/or the Natural Resources Conservation Service (NRCS) to make sure what you are planting is considered a cover crop for your state. In some states, for example, corn or soybeans for silage can be planted on acres originally targeted for corn or soybeans for grain.

Even if you don’t have any prevented planted acres, perhaps your grain-producing neighbors do. Under these new guidelines, you can have them plant corn and then purchase that crop as silage as long as it gets harvested after September 1 (a sure bet at this point).

If fields are still too wet to plant (as many are), seeding cereal forages such oats in late July or early August remains a good option. Even in a normal year, fall-harvested cereals provide high-quality forage that can be used for a variety of livestock classes.

Recently, one producer asked me about seeding alfalfa this late in the game.

Alfalfa can be seeded anytime as long as adequate moisture is available through the establishment period. The risk of seeding this late is that the spigot may shut off during the hottest part of the growing season. That said, it may not, in which case there would still be time (60 days) to get one cutting before or around early September, then allow for regrowth during the fall.

Another option is to just wait and seed alfalfa later this summer.

Virtually everything that could go wrong did go wrong this winter, spring, and early summer. Winterkill, late planting or no planting, and delayed forage harvests have all had a significant impact on the current state of forage affairs. These new crop insurance rules won’t cure all that ails, but they do open up some useful harvest options that weren’t previously available.