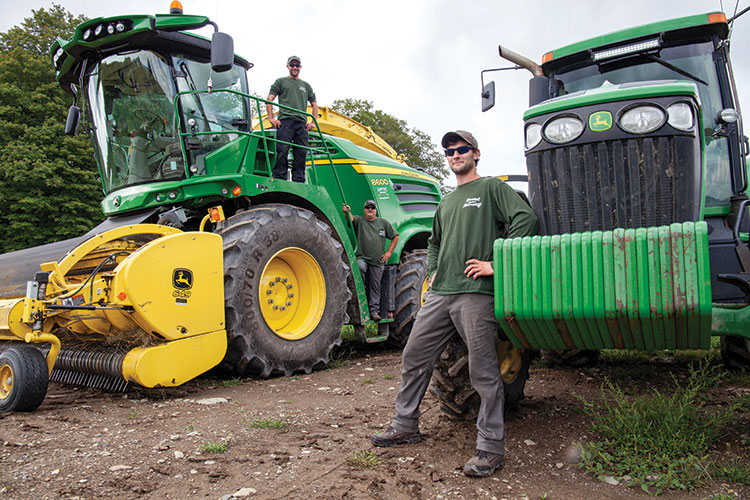 Richie Rainville grew up on a dairy farm in the far northern reaches of Vermont, near the town of Highgate and about 2 miles from the Canadian border. Always being somewhat of a machinery guy, he had dreams of going West and working on a harvest crew. That didn’t quite work out . . . but something else did.

Rainville began working for his cousin, who had a custom forage harvesting business. He cut his teeth running the forage harvester. Following that stint, he drove chopper for a large dairy farm for one year. Then, in 2003, one of the few custom harvesters in the area was looking to retire and approached Rainville to see if he wanted to buy his business. Soon after, Woodchuck Custom Harvesting was born.

Woodchuck isn’t the largest custom harvesting outfit that you’ll come across. Rainville has two full-time employees and an arsenal of part-time support. He currently runs two choppers — a John Deere 8600 and 7480. Woodchuck also has two H&S hay mergers. Mowing, packing, and trucking are all subcontracted. “We’ve tried to become a lot more efficient over the past few years with larger equipment,” Rainville noted.

Northern Vermont is not exactly the Great Plains in terms of geography and weather. “We have challenging weather and a lot of smaller fields,” Rainville explained. “We have to travel long distances for small fields, so we have to be efficient in terms of our harvesting, but I guess everyone has their challenges regardless of where they operate.”

Most of Rainville’s 12 to 15 dairy clients use his services every year. “They’re excellent about communicating when their crops are getting close to harvest time. Most all of my customers are very flexible. My clients are super to work with. They understand that I can’t make all my payments on one job. I’ve got to have everyone to make this business work.”

Communication doesn’t end with the growing season. “We are in constant communication with customers, even during the winter,” Rainville said. “They’re great about letting me know if they will be adding or subtracting land.”

One of Rainville’s customers is Copperhill Farm, located in Fairfax, Vt. Jim Magnan and his two sons operate the 550-cow dairy. “We see a lot of advantages to custom harvesting,” Magnan explained. “We’ve been doing it for over 12 years. It’s challenging for a farm like ours to own all of the equipment and hire the labor to run it. We do cut our own hay, but Richie takes it from there. You just have to have good communication. If operated like Congress, this arrangement would never work. You’ve got to work together,” he added.

Rainville emphasized that without a strong support team he would never be able to stay in business. “First, we have great local machinery dealer support,” he said. “They keep us running regardless of the day or the time. If I need a part, they will get it to me if it’s in stock or pull it off a machine they have on the lot.”

The young entrepreneur also doesn’t have a problem contracting with the operators who take care of the mowing, packing, and trucking. “I call them and they are ready to go,” Rainville said. 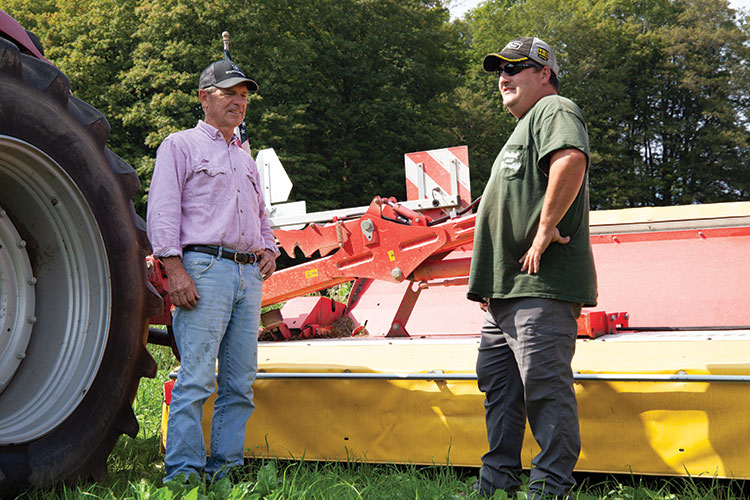 With only two employees, Rainville knows he can’t run 24/7. “Depending on the weather, we’ll go all night if we have to,” Rainville explained. “Otherwise, we try to get employees home for family time, if possible. I’ve got a 1-year-old myself now, and that sort of changes your outlook on what’s important.”

Rainville’s wife, Virginia, grew up on a dairy and still works on the family farm in the morning before going to teach special education at a local school.

“I could never see myself in an office job or factory,” Rainville said. “This is an all-in or all-out occupation, but I’m really lucky to have such a supportive wife and client base, and that’s what makes this business so rewarding.”

Most of the hay crop fields in northern Vermont are grass-based and cut on a 25- to 30-day interval. Typically, four cuttings are harvested per year.

“Hayfields are sometimes seeded with alfalfa, but it usually doesn’t stick around for more than a couple of years,” Rainville said. “In a normal year, we begin first crop between May 20 and 28 and try to get the grasses off before they start to head. Normally, we cut at about 3 inches to promote regrowth and lower the ash levels,” he added.

“For corn silage, we run with the processor rolls as tight as we can get them from start to finish,” Rainville noted. “Our kernel processing scores generally range from the low 70s to low 80s. We put in new rolls every year if they need it. I don’t want to get a call that the feed isn’t good enough, and we don’t want to be swapping out rolls in the middle of harvest.”

Rainville has no plans to change drastically in the future. “We’ll take on new clients where it makes sense, but I think we’re at a good size to service everyone and do a good job,” he said. “I’m focused on putting up excellent feed so that my clients can stay economically viable by making as much milk as they can.”

This article appeared in the January 2020 issue of Hay & Forage Grower on pages 12 and 13.

Angus, good forage, and a father’s legacy Next