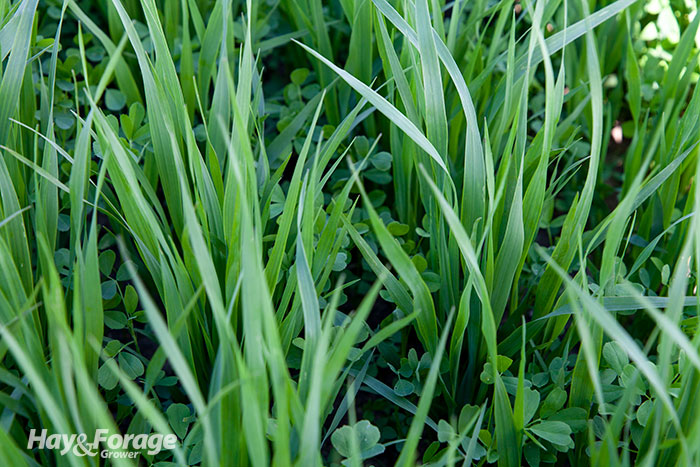 There was a day when establishing alfalfa with a cereal grain companion crop was a standard operating procedure; then, better herbicide options were brought to market.

Although companion crops are not as common as they once were, there are still situations where they make a lot of sense. Sometimes, it’s the best or only option.

Seeding a grass species at the same time as alfalfa negates any subsequent herbicide use and often requires a companion crop to help suppress weed growth. In this scenario, it’s generally recommended to remove the small grain when it reaches the boot stage to reduce competition with the developing alfalfa and grass seedlings.

If alfalfa-grass mixtures are desired, but you really don’t want or need the cereal forage, there is still a work-around option. Seed a Roundup Ready alfalfa variety and then make a glyphosate application after the alfalfa reaches the appropriate stage (three to five trifoliolate leaves). Soon after, interseed the desired grass species into the stand using a no-till drill and hope for adequate rainfall.

Highly erodible fields also provide situations where a companion crop is beneficial for helping to hold soil in place during the early establishment phases of the alfalfa. Again, harvest the small grain at or near the boot stage.

If you really don’t need or want the cereal forage but have erosion-prone fields, another option is to kill the cereal forage when it reaches 4 to 6 inches. This can be done with a postemergence grass herbicide like sethoxydim or glyphosate if a Roundup Ready alfalfa variety was seeded. This approach provides erosion control benefits but also allows for more alfalfa yield during the seeding year.

A third scenario where companion crops may prove beneficial is on fields with heavier soils that tend to hold water. In this case, the companion crop is helpful in using some of the excess soil moisture, providing improved soil conditions for the developing alfalfa seedlings. The companion crop also can help reduce soil crusting in clay-based soils.

Finally, if there is a short-term forage need, growing a companion crop will get you the most forage yield in the shortest amount of time, though the total-season yield of pure alfalfa will be reduced.

The greatest risk to using a companion crop is not being able to get the cereal harvested before or soon after the first seedheads emerge. Only bad things happen to the alfalfa if the companion crop is left in the field too long. These include:

A cereal companion crop still has a place in alfalfa establishment, but it’s important to keep in mind that alfalfa is always the “money crop” in this duo.

Be flexible with stocking rates Previous