Grasses are talking: Are you listening? 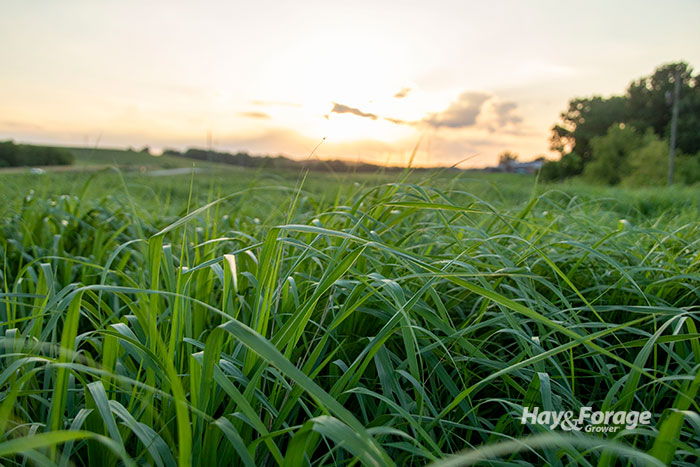 Alfalfa may be known as the “Queen of Forages,” but there’s no disputing the fact that grasses are grown more widely across the U.S. and provide the backbone of the greater forage industry.

• Large fields of timothy for export in the Northwest

• Vast expanses of native grasses in the Great Plains

• Acres of bermudagrass in the South

• Millions of acres of tall fescue through the mid-South

• Alfalfa-grass mixtures in the Northeast

Although different species of grasses have unique characteristics, as a group they are generally more tolerant of poor management and subpar soils than are many legumes. They often grow in spite of what we do rather than because of what we do.

Yes, grasses are more forgiving than legumes, but they also are very adept at telling us their preferred lifestyle and what it will take to get the most benefit from their use as a livestock feed. It’s best we listen to and observe our grasses.

I recall being on a commercial alfalfa hay operation a couple of years ago. The producer noted that he was getting more requests for a mix of alfalfa-grass hay, so he decided to put in some acres of an alfalfa-orchardgrass mix. Within a couple of years, he managed to kill all of the orchardgrass. This occurred because of his usual 2-inch or so cutting height that he used on his alfalfa fields. “I just didn’t know there was that big of a difference,” he said.

Grasses just don’t tolerate frequent, aggressive defoliation. It’s true for hayfields and pastures. They’ve been telling us this for decades, but it’s still probably the most common mistake being made in the countryside. Grasses need leaf area to initiate rapid regrowth . . . it’s just that simple. Leaving 3 inches of residual is good, 4 inches is better.

Lush, green, and growing: During this time of year, is there anything that looks better than a field of 8-inch tall grass?

Not only does it look good, but it also tastes good and makes milk and meat. Unfortunately, this doesn’t last forever. Fortunately, a grass plant tells us (no, screams at us) when the party is over. It shoots a seedhead.

If we are to take advantage of grass forage quality, it has to be done at or before seedhead emergence, as fiber digestibility declines rapidly once reproductive mode kicks into gear. A high NDF concentration and low NDF digestibility is not a good combination. Effectively, feeding that combination to a cow equates to just making more manure. Grasses tell us when that’s going to happen. We should listen.

In the case of Kentucky 31 tall fescue, seedhead emergence takes on the added disadvantage of higher toxin levels in the inflorescence.

If you haven’t read about well-known pasture consultant Jim Gerrish’s approach to avoiding seedheads, check out his column in the April/May issue of Hay & Forage Grower.

Finally, many newer grass varieties are bred to head later than older, traditional ones. They’re well worth the investment.

Give me a side of nitrogen

I won’t get into specifics here, but all grasses need adequate amounts of nitrogen for optimum yields and forage quality. Specific amounts and timing will vary with region and species, so check your local extension recommendations. There are both good times and bad times to make nitrogen applications, depending on utilization.

Grasses aren’t particular where their nitrogen comes from; it could be legumes, manure, or commercial fertilizer, but it has to be available. If nitrogen is lacking, once again, grasses will tell us. Their growth will be slow, and their appearance will be chlorotic (yellow). Few crop inputs offer a greater economic payback than nitrogen on grass where adequate soil moisture is available.

If you’re currently not doing so, observe and listen to your grasses. Like your dog, they behave better with good treatment.

There’s no one recipe for growing timothy Next