When do you keep forage seed in the bag? 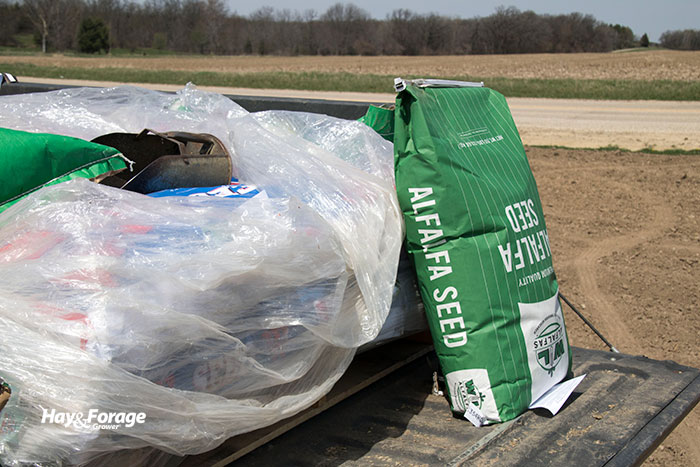 Working as an extension agent or crop consultant, you eventually get the question, “When it is too late to plant (fill in the blank) in the spring?”

Every state extension service has their “recommended” cool-season forage seeding date windows; however, sometimes Mother Nature fails to read the instruction book. In 2019, she burned it.

Everyone likes to tell their story about the time they planted forage or corn way past the recommended planting range and came out smelling like roses, so I’ll tell you mine.

The Wisconsin county where I worked in as an extension agent was going to host a major farm show the next year, and I was charged with establishing an alfalfa variety demonstration plot with 20 to 30 different varieties. I went one step further and decided to establish a “History of Alfalfa Breeding” demonstration featuring all of the “landmark” varieties released in the previous 100 years, starting with Grimm, which became widely used in the early 1900s.

Some of the older varieties were hard to come by, and I had one shot to make it happen. A research technician at what was then a Pioneer Hi-Bred alfalfa breeding station agreed to come over and plant the alfalfa with his small-plot seeder. It was a two-man operation.

With all of my seed sorted and packaged for planting, the spring marched on with day after day of rain. When there was a short window, my Pioneer guy understandably had to get the company’s own plots planted.

April turned to May, which then turned to June. Still, no seed in the ground. Finally, on the third Sunday in June — Father’s Day — my planting buddy called and said he could come over.

We planted the multiple alfalfa plots and grass walkways between and around the rows of plots. It looked great, but I was concerned with July looming just around the corner.

Fortunately, the weather that followed was warm with just the right amount of rain to sustain seedling growth. The alfalfa jumped out of the soil, and we never looked back. It was a thing of beauty that I nurtured over the next 13 months. Somewhere, I still have photos of those plots that I’m sure my kids will fight over after I, too, get planted.

So, that’s my late-planting story. But is it smart to plant forage crops on Father’s Day — or any other day — that’s two months after the “recommended” range?

Without question, there are plenty of springs when weather puts a damper on planting. We like to seed cool-season forage species early because they germinate at relatively cool soil temperatures, they can get ahead of the weed flush that comes later, moisture is usually a nonissue, and total-season forage yields are enhanced. There is also a lower risk for hard thunderstorms that can wash seedings away or cause severe soil crusting.

For late plantings, we can flip all those advantages into risk factors. The primary one is the better odds for hot, dry soil conditions. What we don’t want to happen is to get a little rain, germinate the seed, and then have our seedbed turn to dust. That is a forage seeding’s apocalypse.

Weeds can definitely be an issue with later plantings. However, there are certainly more herbicide options today than was once the case. Our convenience trait, Roundup Ready, makes weed control for alfalfa especially easy with little risk of crop injury.

If seeding alfalfa and grasses together, weed control must be taken into consideration before leaping into a late planting. It could be a deal breaker with no herbicide options available. Seeding-year forage yield, for any type of planting, will always be reduced for delayed plantings compared to earlier seedings.

A final consideration for late plantings is forage seeding crop insurance. Depending on location, there will be a final seeding date whereby if seedings are made later, they will not be covered.

So, can you make late seedings of cool-season forages?

Personally, I think there are greater risks a forage producer can take than making a late spring seeding. For example, making a late fall seeding when there isn’t enough time to get an adequate root system developed.

Because later spring seedings are made with warmer soil temperatures, they usually emerge quickly. More often than not, the real deal breaker is a lack of consistent moisture after seeding. So, check the weather forecast. If you have irrigation, that’s a big advantage.

There's no such thing as a free nitrogen lunch Next