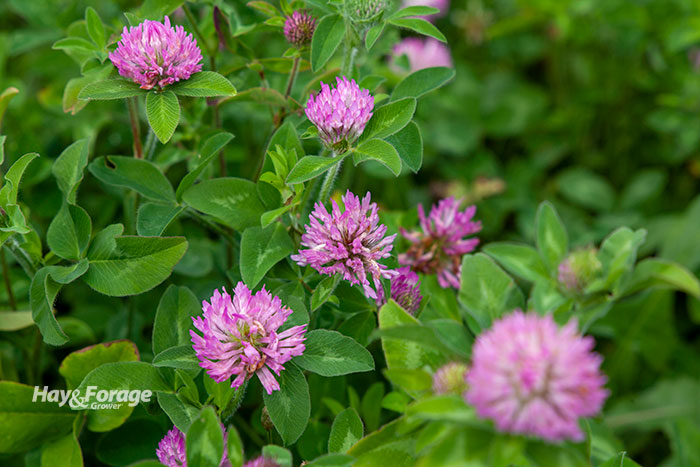 There’s an old saying: “Always a bridesmaid, never a bride.” It’s usually said of a person who has potential that has never been fulfilled, or a person who, to use a horse racing analogy, finishes a lot of races in the Place or Show positions.

Perhaps no forage species deserves the bridesmaid moniker more so than red clover. That said, few forage species attend as many weddings or run as many races as this underappreciated forage resource.

Red clover is a widely adapted forage species. It’s found border to border and coast to coast. It’s also rarely a “primary” forage source on most farms, but more often supports the larger forage program or is viewed as a potential emergency forage or green manure crop.

I probably have been on a livestock grazing operation where there wasn’t any red clover in the pastures, but I can’t remember when. Again, red clover shows up in a supporting role, but it always shows up.

The advantages that red clover provides to a pasture and grazing livestock are numerous. No species, legume or grass, establishes by frost seeding more successfully than red clover. Once established, red clover has been recognized as providing yield, quality, and nitrogen to a mixed-species pasture. Livestock devour its large, variegated leaves.

Red clover, in most pasture systems, behaves as a short-lived perennial and must be reseeded every two or three years unless it’s allowed to mature and produce viable seed. Fortunately, red clover seed is relatively cheap and, as mentioned previously, easily establishes by frost seeding or drilling. Unlike alfalfa, red clover tolerates slightly more acid and wetter soils.

As common, though probably still underused, as red clover is in grazing systems, it is the rare occurrence that we see red clover in conventionally harvested hay or haylage fields where the competition is alfalfa or a faster drying grass species. About the only time red clover is mentioned in mechanically harvested systems is as an “emergency” forage, often being interseeded into thinned alfalfa stands.

Tom Kilcer, an independent crop researcher and consultant based in Kinderhook, N.Y., thinks it might be time to re-evaluate red clover as a primary forage alternative to alfalfa on marginally drained soils.

Kilcer has been applying modern forage management techniques to red clover and achieving positive results when the crop is harvested as haylage.

The first place to start, says Kilcer, is by selecting a newer, proven variety. Some of the more recent red clover varieties will offer a strong three production years.

Red clover has always had the reputation of being slow to dry when compared to alfalfa and cool-season grasses. “Wide swath mowing, greater than 80% of the cutter bar width, is the key to getting red clover dry,” Kilcer writes in his monthly newsletter. “For first cutting, you might need to ted it one time after about two hours of drying.”

In short rotations as a haylage crop, Kilcer finds that red clover out-yields alfalfa in his northern New York locations and in Cornell University variety performance trials. He notes that soil compaction frequently limits red clover yields because it is often grown on poorly drained soils. “Compaction on these moderate to wetter soils limits the root growth to 6 or 7 inches, severely reducing (clover) yield when it turns dry,” Kilcer explains.

Based on the New York field trials, Kilcer offers that red clover has some unique forage quality features. First, he recommends that pure red clover stands be harvested when the neutral detergent fiber (NDF) content reaches 40%, which is similar to when alfalfa might be harvested. In cooler environments, red clover will likely be ready to harvest sooner than alfalfa.

Red clover NDF digestibility was greater or equal to alfalfa with some variation based on location. More importantly, whereas alfalfa stores most of its energy as cellular starch, red clover stores its nonstructural carbohydrates as sugar. “This sugar provides for a rapid fermentation,” Kilcer explains. “It also makes it even more critical to cut in wide swaths and get the crop dried down fast to keep respiration from reducing the sugar content before it gets to the cow’s mouth.”

An interesting quality of red clover is that it has a higher concentration of pectins than alfalfa, which consistently showed up in the New York trials when nonfiber carbohydrates were measured. It also provides a greater proportion of by-pass protein and results in less rumen ammonia being produced from the plant’s protein.

Red clover remains a difficult crop to bale as dry hay without considerable leaf loss, but for haylage or baleage, perhaps more producers need to be utilizing the species on fields where alfalfa is difficult to establish or is short-lived. It makes for a great legume companion with cool-season grasses.

It’s the “other” haymaking tool Previous