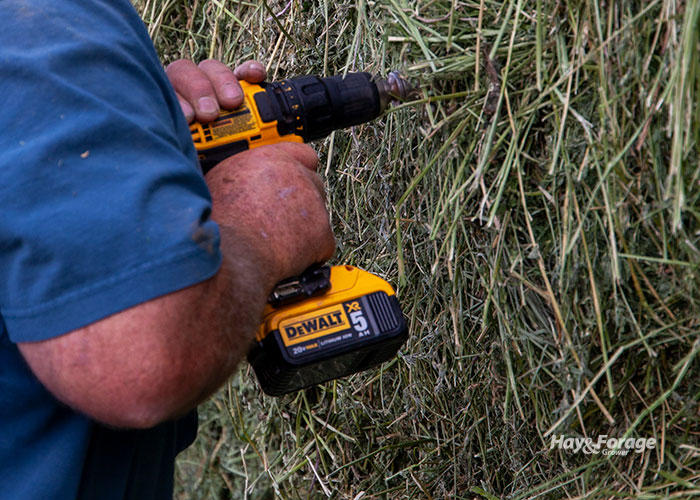 Many times, you don’t know what you have until it’s gone. If you don’t sample and test hay, this may happen to you as forages get fed this winter. Knowing what’s in your inventory on the front end can help you formulate a sound winter-feeding program.

University of Kentucky Forage Specialist Chris Teutsch recently offered what he feels are some of the best practices for sampling and testing hay. Here are some of the more important points to remember:

• Always sample hay by lots: “Lots are all the bales produced in the same field during the same cutting and should not represent more than 200 tons of dry matter,” Teutsch explained. A lot of first cutting hay will have different values than a lot of third cutting hay, even if from the same field.

• Delay sampling: “As your hay undergoes the heating or sweating process it will lose value, and if it’s left outside in the weather, it will lose value,” he asserted. For bales protected from the weather, allow three to four weeks after baling to pass before collecting samples. For bales stored outside, pull samples only three to four weeks before you intend to feed it.

• Get a representative sample: “A representative sample will consist of at least 20 cores from 20 bales (one core per bale) resulting in a sample size of approximately one-half pound of hay from each lot,” he said. Use a sampling strategy such as dividing the total number of bales by 20 (number of desired cores). This can help to get a representative sample of the hay lot. If a lot consists of 240 large round bales and 20 cores are desired, then every 12th bale should be sampled (240 total bales ÷ 20 samples = 12). If the lot contains less than 20 bales, sample every bale.

• Label the sample properly: Be sure to include your farm’s name, a description of the hay lot sampled (for your reference), the type of hay, cutting and year harvested, and the date it was sampled.

• Sample baled silage in a similar manner: To ensure fermentation is complete, sample lots at least four to six weeks after baling and label them properly. “However, once you pull cores from wrapped bales or silage, be sure to repair the hole with a UV-resistant tape designed for silage film,” Teutsch expressed.

• Take care of the sample: Store the sample in a cool, dry space and out of direct sunlight if you are not immediately able to send the sample to the lab. Avoid subdividing samples. Baleage samples need to be refrigerated.

The forage specialist recommends that you core rectangular bales by centering the probe in the end and inserting the probe horizontally into the bale. Sample round bales by drilling or pushing the probe horizontally into center of the rounded side of the bale. Remove weathered material from the area to be probed prior to sampling. “Weathered material represents refusal and should not be included in the sample,” Teutsch noted. The probe should penetrate the bale at least 15 to 18 inches for rectangular or round bales.

Finally, Teutsch advised to remember to allow time for sample shipping and analysis.

Forage Poll: How would you rate your forage inventory going into winter? Next