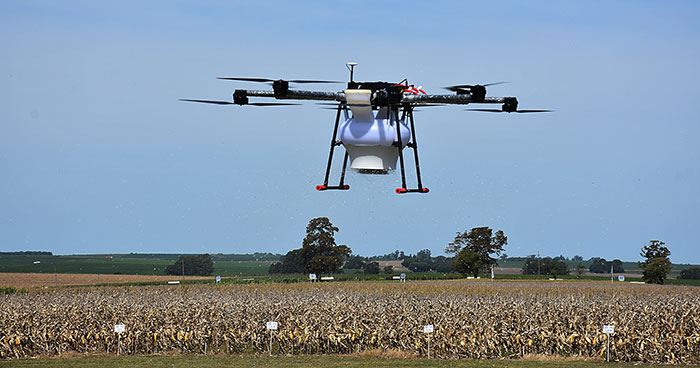 Arial seeding of cover crops into late season corn or soybean fields is nothing new. However, irregularly shaped, small fields and those characterized by rough terrain may not be suitable for aerial seeding by an airplane or helicopter.

University of Maryland extension agents Erika Crowl and Andrew Kness recently reported first-year results from an on-farm trial where a cover crop of radish was seeded into a 26-acre field of standing corn using a drone. The seeding occurred on August 27, 2020, in Baltimore County, Md.

Sixteen pounds of pure live seed per acre were seeded using a HSE-TTA drone equipped with a spin spreader capable of carrying 40 pounds of seed. The trial field was irregularly shaped, rolling, and in close proximity to power lines and wood lines. Corn grain was harvested on September 15 and cover crop establishment was measured on October 21.

The average cover crop plant density in the field was 3.1 plants per square foot, with a minimum of zero and maximum of 6 plants per acre across the 20 randomly selected locations where data was collected. Radish plants averaged 5 inches in height at the time of rating.

Canopy density was calculated using the Canopeo smartphone app (Oklahoma State University Department of Plant and Soil Sciences; www.canopeoapp.com). Images were captured at 20 random locations across the field at a height of 2.5 feet above the ground, and the percentage green canopy was calculated by Canopeo. The average canopy cover was 39.1%, with a minimum and maximum value of 20.3% and 53%, respectively.

The Maryland extension agents noted that aerial establishment of cover crops is heavily influenced by the availability of soil moisture. In 2020, rainfall in the area was adequate and allowed for good cover crop establishment.

Based on their results, Crowl and Kness feel there is potential that aerial seeding a radish cover crop with drones may be an effective method for establishing cover crops in fields where no other options exist for aerial seeding.

Future work will be done to replicate and gather additional data so that the feasibility of seeding cover crops with drones is further documented and sound recommendations can be made.

Editor’s note: For a dairy or beef grazing farm, one has to wonder if this seeding method might have utility for frost seeding red clover seed onto pastures in the spring.

Backing off on silage hybrid maturity Next

The root of the soil organic matter: Part 2 Previous