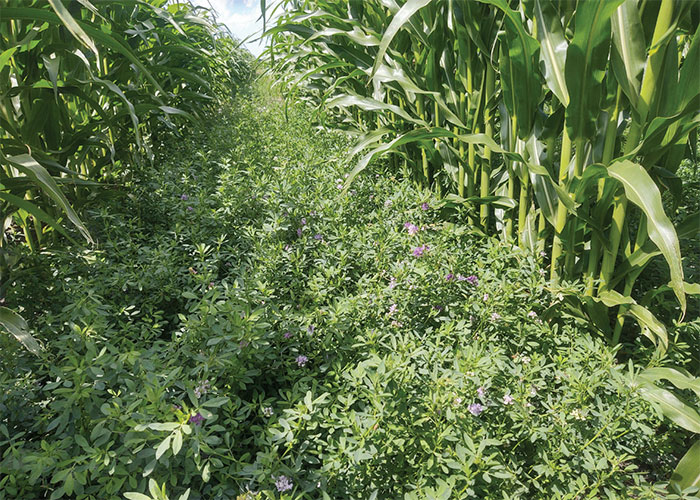 The concept is simple: grow corn and alfalfa in the same field during the same year. The execution is not necessarily as simple, and there is risk involved.

What seemed an unlikely marriage of two crops in the same field is starting to gain momentum in both research plots and farm fields. By seeding alfalfa immediately after corn in the same field, there’s a possibility of having an established alfalfa stand the next year and skipping the low-yielding seeding year.

Most recently, researchers at North Dakota State University initiated a trial to investigate the effect of corn row spacing on the success of alfalfa establishment. They reported their results at the American Forage and Grassland Council’s annual meeting.

Alfalfa was seeded immediately following corn planted in either 30- or 60-inch rows at two locations in 2020. Weeds were controlled using two applications of glyphosate. The intercropped treatments were compared to either corn or alfalfa planted alone.

Corn grain yield for both row spacings was the same whether alfalfa was intercropped or not (see Figure 1). As expected, the corn planted in 30-inch rows yielded significantly more than the 60-inch row corn. The yield reduction for the 60-inch corn was approximately 16%.

Figure 1. Corn grain yield as impacted by corn row width and the presence of an alfalfa intercrop. 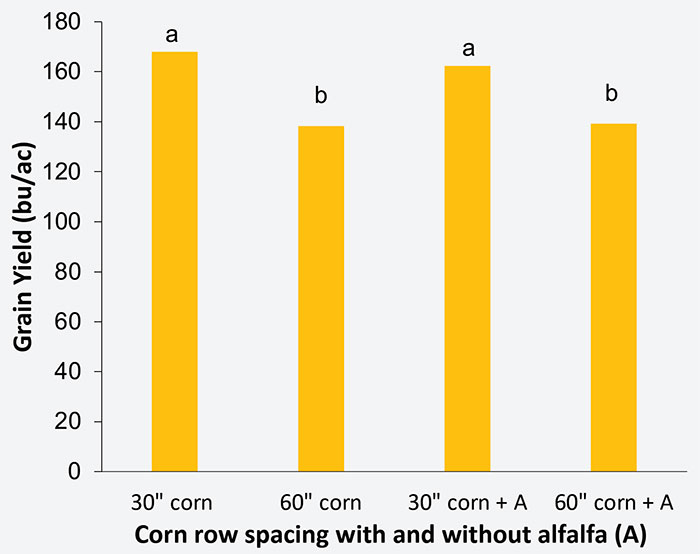 The researchers found no difference in alfalfa stand counts between the monoculture, which was cut twice, or the intercropped treatments (see Figure 2). Although not statistically significant, the alfalfa monoculture had a slightly higher stand count in the fall with a smaller percent drop from the spring count. 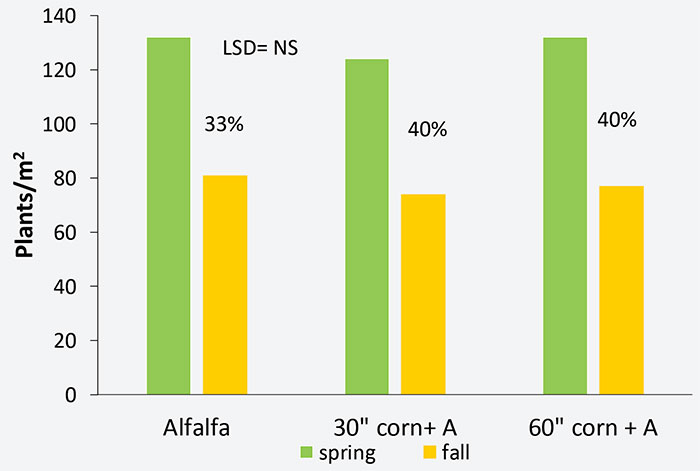 The researchers concluded that the presence of alfalfa did not affect corn grain yield, although the 60-inch row spacing had significantly lower corn grain yield compared with 30-inch corn. Row spacing did not significantly impact alfalfa end-of-year stand counts, but the reduction of light interception for the alfalfa under 30-inch corn rows may reduce the alfalfa’s ability to survive the winter.

Meadow fescue: a star in alfalfa mixtures Next

He learned his baleage lessons the hard way Previous