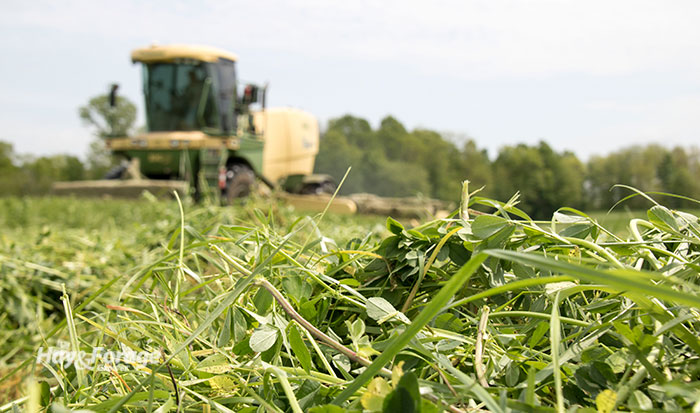 It’s now been several years that we’ve known meadow fescue is a preferred perennial cool-season grass in mixtures with alfalfa, or at least in Northern latitudes this is the case. The grass species also has the advantage of being more winter hardy than most other cool-season grasses, including tall fescue.

According to researchers at Cornell University, as little as 5% grass in an alfalfa-grass mixture will significantly improve the fiber digestibility of the mixture compared to pure alfalfa.

A research report from the Northern New York Agricultural Development Program states that “More than 120 meadow fescue varieties are certified in Europe, and most of them have not been evaluated for yield or quality in North America. There is a relatively large acreage of meadow fescue (MF) in Europe and Canada compared to a very small acreage in the U.S.”

The Cornell research team, led by Debbie Cherney, has been involved in collecting a number of meadow fescue varieties from Europe and testing them alongside some of the few U.S. varieties in alfalfa-grass mixtures on several New York farms. The project began in 2018. The average seeding rate for the meadow fescue was 2 pounds per acre of pure live seed, although rates were adjusted based on seed size to achieve the same number of seeds planted per acre.

Some of the important takeaways from this project to date include:

• Among the meadow fescue varieties, there were large differences in the grass percent of the mixture, grass crude protein (CP) percent, and grass neutral detergent fiber digestibility (NDFD).

• The extent of variation in the measured forage quality parameters varied between farm locations and years. It also varied between summer and fall sampling dates.

• NDFD of the best varieties were often higher than 75%.

• The grass CP% was always sufficient in an alfalfa-grass mixture because of the inherently high protein content of the alfalfa.

• There was always a range in CP among varieties, but most of the variation was due to a range in the grass percent of the mixture. The less grass in a mixture, the higher the grass CP%.

• Meadow fescues, on average, were considerably higher in NDFD than tall fescue. Pradel, among the most popular of meadow fescues sown in the U.S., consistently had a high grass percent in mixtures, but it tended to be among the lowest in NDFD among the varieties tested.

• Hidden Valley, a U.S. variety, consistently had a lower grass percent in mixtures, but it often was among the highest in NDFD.

• Driftless, which was developed from Hidden Valley, also tended to have a high NDFD but generally established with a higher grass percent than Hidden Valley.

• Other meadow fescue varieties were not consistent over sites or cuts within a season.

• More studies are needed to compare species under a variety of climatic conditions and soil types.

Read the full report of meadow fescue variety performance for specific details and results from this study.