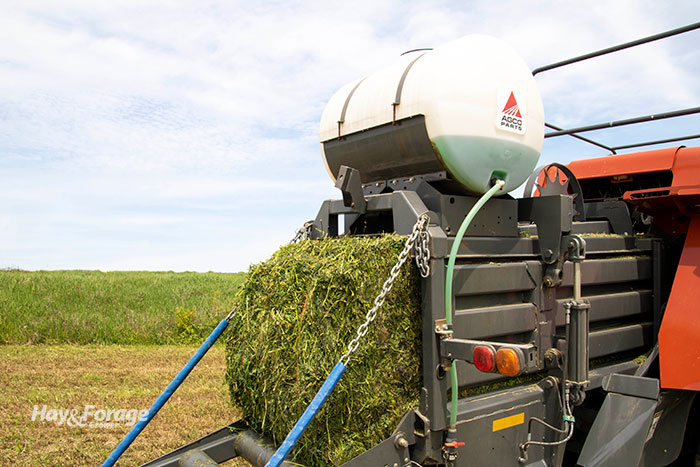 Searching for a silver bullet that will preserve wetter than desired hay has been a pastime for private companies, researchers, and hay producers for many years.

Before the days of commercial application options, pitching salt around the haymow like it was magic fairy dust was an annual event on many farms. Yes, farmers slept better by doing so, but the saltshaker approach ultimately proved to be ineffective as a hay preservative.

Propionic acid has been another popular means to help preserve wet hay. Unlike salt, it has proven to be an effective preservative. It also was corrosive to equipment and could turn new paint and steel into rust over the course of a haying season.

Next came buffered organic acids, including propionic. Again, they were very effective in preserving hay but without the corrosive properties of their nonbuffered cousins. These days, almost all organic acid hay preservatives are buffered and often contain primarily propionic acid, but they may also include other acids such as acetic, formic, and benzoic.

Eventually, some companies began marketing microbial preservatives for hay. After all, they worked well on silages. These were easier to handle than organic acids and had no corrosive properties.

Through the years, there have been many research trials that have evaluated the various options for preventing hay heating and molding. Recently, researchers at the University of Maine conducted a meta-analysis to evaluate the effects of preservatives on hay spoilage during storage. A meta-analysis is a powerful statistical tool that collectively summarizes many research trials and results in a firmer conclusion than what might be possible from a single study.

The meta-analysis included 50 studies that evaluated chemical preservatives and 21 studies that focused on or included microbial inoculants. 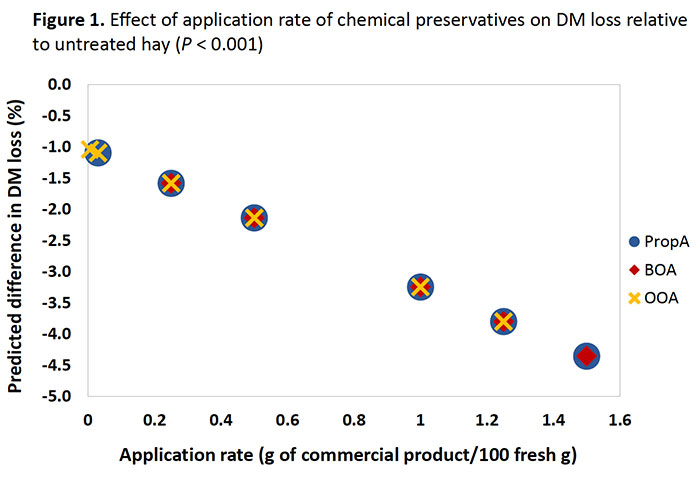 Propionic acid or mixtures with propionic acid were the most effective product for reducing mold in stored hay bales, although other organic acids such as acetic, benzoic, and formic acids also provided some benefit.

Propionic acid was more effective at reducing visible mold in grass hay compared to legume hay. Even so, both hay types benefitted from being treated with the organic acid.

The researchers concluded that organic acid-based preservatives are effective at preventing spoilage on wetter than desired hay while limited benefits were observed for microbial inoculants.