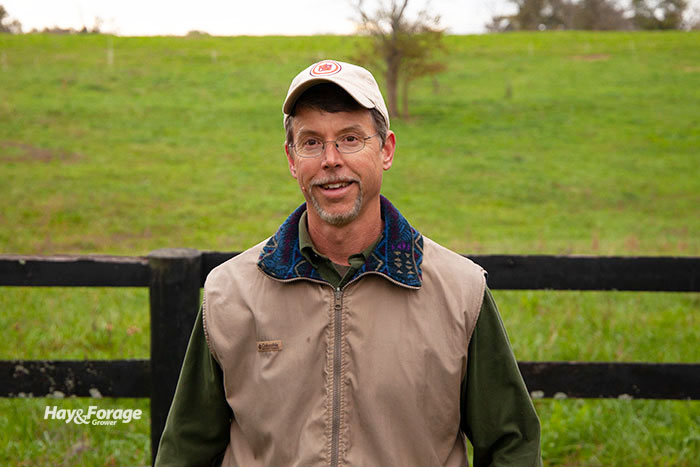 Greg Halich is an economist by trade. He puts together full and partial budgets on everything from corn to hay and spends time in the classroom molding younger minds about the intricacies of futures and options contracts.

Halich’s day job is performed at the University of Kentucky in Lexington, but by nights and weekends he raises grass-fed beef cattle. He considers himself a slightly above average rotational grazer, mostly limited by time, but if you really want to get him excited, just ask what he thinks of winter bale grazing and be prepared to spend some time listening.

Through trial and error, Halich has been fine-tuning a system for bale grazing in the humid upper South where winters are more often characterized by rain, mud, and ice rather than frozen ground and snow. This necessitates a far different management scheme than where bale grazing was initially perfected in the upper Great Plains and Canada.

“With bale grazing, you can cut your winter tractor use by 90% and improve the fertility and production of pastures without spending one cent on commercial fertilizer,” asserted Halich, who has been bale grazing his cattle for over a decade.

In addressing attendees at the Kentucky Grazing Conference, Halich said he and those farmers he works with on bale grazing have adopted the winter-feeding system because most of the alternatives have too many deficiencies.

“Many of the designed feeding pads, which are expensive, and so-called drylots eventually turn into mudholes,” Halich noted. “There is also the problem of capturing the manure and urine nutrients and getting them uniformly spread across pastures. Compost bedded-pack barns work well but are really expensive and require a high amount of tractor time and maintenance,” he added.

Halich admitted that unrolling hay on pastures in the winter is another effective means of feeding cattle in the winter and distributing nutrients, but it also comes with some disadvantages. The primary two are high amounts of hay waste and the need to start and run tractors every day. There is also the potential for tractor ruts when conditions are wet.

A recipe for success

For those thinking about bale grazing, Halich recommended that about one-third of the needed winter hay be staged out in the pasture during late fall — before wet weather arrives. They need to be placed where they will be fed. After a few of years of experience, most of the bales can be placed in pastures prior to winter.

Grazing begins closest to the water source with a hot wire between the first and second feeding paddock and another between the second and third paddocks in case there is a breach of the first wire. This is a similar approach to strip grazing, only with bales.

Halich also highly recommended using hay rings to minimize waste; these can easily be rolled to the next feeding of bales when cattle are moved.

When planning a bale grazing system, Halich likes to work in terms of tons of hay per acre. “The biggest mistake you can make when starting to bale graze is to feed hay out at high densities,” he said. “I recommend starting at about 2 tons of hay per acre. That’s about four or five bales per acre, and this will help minimize and localize the amount of pugging that will take place in your pastures. We can’t do it the way that they do it in the North,” he noted.

One of the strategies that has worked well for bale grazers is to combine stockpiled tall fescue with bale grazing. This offers improved nutrition potential as the cattle consume both the high-quality stockpiled forage along with the hay. 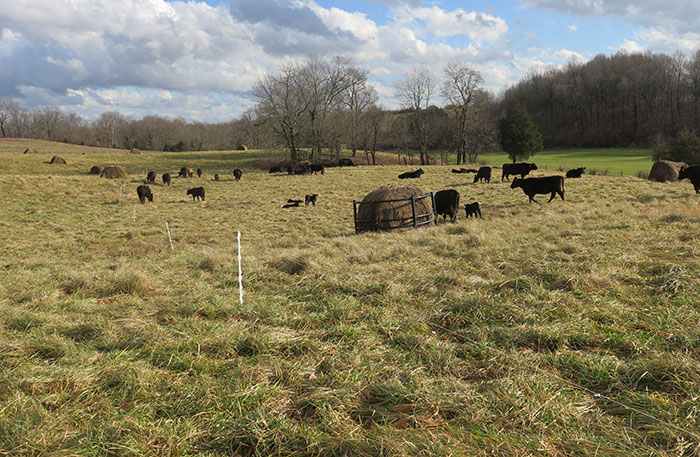 When a heavy rain event occurs, Halich said there will be some damage around the hay ring, or what he calls the impact zone. “These areas can easily be reseeded by hand in the spring, and they will come back quickly because there’s a lot of fertility around the bales. On my farm, I use a mixture of forage chicory and plantain, which help break up any compaction, along with annual lespedeza, Italian ryegrass, clovers, and orchardgrass. Depending on where you are, you’ll have to experiment a little to see what works best,” he added.

Halich noted that many of the bale grazers he has worked with have noted how much cleaner the cattle are compared to when they drylotted their animals. “This results in better overall herd health,” Halich said. “Cattle will always have a fresh spot where they can lie down.”

In concluding, Halich said that bale grazing may not be for everyone, but for those who are willing to make it work, bale grazing is a low-cost and labor-saving method to overwinter beef animals . . . even in the Fescue Belt’s wet winters.

Wrapping gifts and bales Next