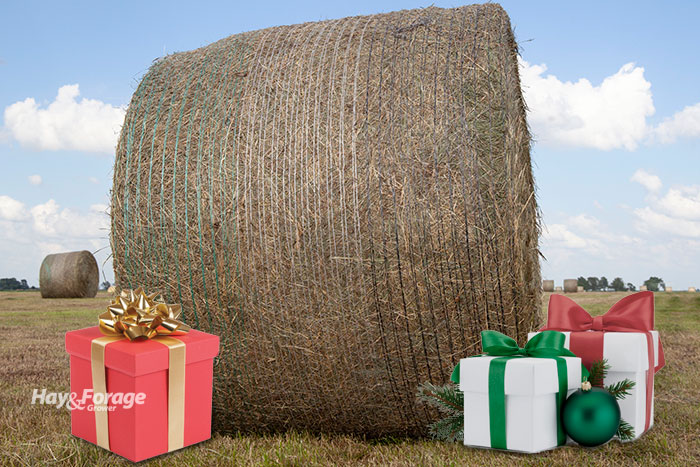 There will be a lot of gift wrapping going on this week. It’s my opinion that the ability to wrap gifts correctly and neatly is a genetic trait that is either inherited or must be learned through rigorous hands-on training. I’m sure they have schools and YouTube videos to hone such a skill, if you so desire.

Most men either don’t have the wrapping gene, which is a high probability, or claim not to have it simply to avoid the task — also a high probability. Who among the male readership hasn’t purposely done an extra lousy job of wrapping so to never be asked to perform the job again?

I’m not sure who invented the ever-popular decorative gift bag, but I’ll bet it was a man who wished to shuck the wrapping process altogether. Thank you, sir, whoever you are.

But then there’s bale wrapping

For haymakers, the conversation about wrapping and/or binding their wares offers a much higher level of interest and debate than gift wrapping.

During the past 25 years, net wrap has slowly but surely become the “go-to” material for binding round bales. Though more expensive than twine, net wrap offers a number of advantages. These include:

Improved baling efficiency: Spinning plastic twine on bales necessitates 20 to 30 turns of the bale chamber compared to 1-1/4 to 2-1/2 turns with net wrap. This improves baling efficiency by 30% to 35%, according to Kevin Shinners, University of Wisconsin agricultural engineer. That translates to more bales per hour and a reduction in machinery time, labor, and fuel.

Less left in the field: Because the bale spins fewer times in the chamber, less leaf loss occurs in the field. Shinners’ research documents about 1% dry matter loss with net wrap compared to nearly 3% for twine.

Superior outdoor storage: In the Wisconsin trials, dry matter losses for outdoor storage were nearly 20% for sisal twine, which is rarely used these days; 11% for plastic twine; and 7% for net wrap. The net-wrapped bales were superior at shedding water and at keeping moisture from infiltrating the outside of the bale. This advantage will be somewhat negated unless bales are stored on a well-drained surface. Further, outside net-wrapped bales will still suffer more dry matter loss than any type of bound bale stored inside.

The disadvantages of net wrap are primarily centered on costs. A net wrap-equipped baler is going to be more expensive than a standard twine round baler. Further, the net wrap will cost more per bale than plastic twine.

The additional costs of net wrapping are easily recovered by large volume operators, those who routinely store all or a portion of their production outdoors, and by hay growers who market a considerable amount of their production. These factors include a vast majority of hay producers and is probably why nearly all round balers sold today are equipped to net wrap.

Several years ago, I wrote an article about the advantages of net wrap, and one reader took exception, making some valid points. Here were his comments:

“The studies claiming vastly less spoilage with net wrap are done in places like Wisconsin. I hear that it rains there, which makes all of those studies completely false for those of us who live in dry places. I don't see any difference in spoilage.

I hate to gripe at the friends that I pay to bale my hay, but when they insisted on going to net wrap, they bubbled enthusiastically about the time savings, which are cost savings, and then insisted that the price had to go up because net wrap is more expensive. So, to me, it's not a cost savings in any way, shape, or form.

Plastic twine lasts at least as long as net wrap.

Net wrap isn't a little more work, it's twice as much work. With twine, I can set the bale down, chop the strings, walk around the bale, pull all the strings off, roll the feeder over, flop it over the bale, and hop back in the truck and go. With net wrap, I have to stop the truck, go back and cut the net wrap, walk around and pull it off, then climb back in the truck, set the bale down, and put the feeder on. That's assuming that the net isn't snowed or iced on, and assuming that it's not dry, loose hay like wheat or grass that will fall apart and make getting the net out from under it a straining, back-hurting job.”

For this bale user in a presumably dry climate, he clearly prefers plastic twine. For sure, net wrap can be a challenge to remove from bales, especially in cold, snowy weather. For this reason, some feeders choose to leave some or all of the net wrap on the bale. As has been well documented, this can result in future problems.

In the past few years, I’ve found it interesting that many baleage producers are also wrapping their dry hay as a means to limit outdoor storage losses. This strategy not only protects the hay from weathering, but it also helps to maintain the binding.

Opinions about wrapping bales or gifts will forever be debated. A bad job of wrapping gifts doesn’t really carry any economic significance. The same can’t be said for bales.

What’s that hay worth? Next