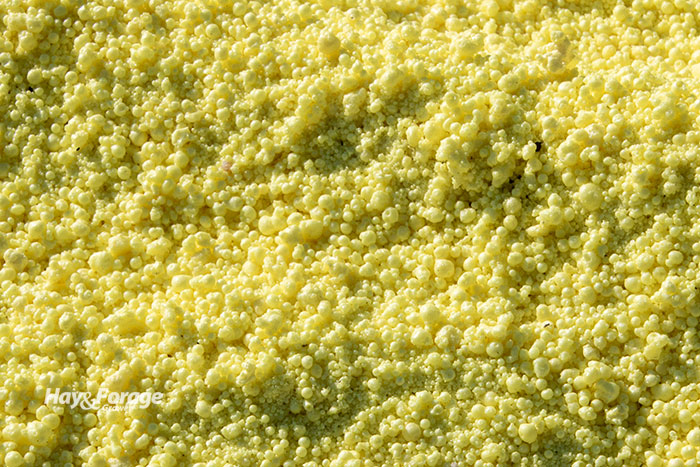 Since the Clean Air Act of 1970 was enacted, precipitation that is laden with sulfur, dubbed acid rain, has all but disappeared. That’s a good thing, but this change has some agronomic ramifications for heavy sulfur-using crops such as alfalfa.

Researchers have discovered over the past 20-plus years that applications of commercial sulfur to alfalfa are needed to realize optimum production, especially on fields that don’t receive routine applications of manure, which is also a sulfur-rich resource.

Depending on factors such as soil type and organic matter, many state extension recommendations indicate that producers apply 10 to 30 pounds of sulfur per acre per year to their alfalfa fields.

According to the nutrient management specialist, there are two main options for growers if they wish to apply elemental sulfur. One is elemental sulfur mixed with bentonite, which includes products such as Tiger 90.

The second option is elemental sulfur that is co-granulated with fertilizer by the manufacturer. This includes products like the MicroEssentials line of phosphate fertilizers and MAP MST (macronutrient phosphate + micronized sulfur technology), which is a newer product on the market.

“The co-granulated sulfur products are touted as being better because they have a lower concentration of sulfur in each granule of fertilizer, which should distribute the product more evenly across the field,” Kaiser explains in a recent blog post.

In one of Kaiser’s studies, alfalfa was established in spring 2020 in Rosemount, Minn., on a deep loess soil. Multiple rates of sulfur (0, 10, 20, and 30 pounds of sulfur per acre) were applied annually to the same plots, with the initial application made in spring 2020 and then an additional application after the first cutting of the following year. The two sources of sulfur used were potassium sulfate and potash-MST. The latter product contains nearly all elemental sulfur.

As a final treatment, Kaiser applied 120 pounds of elemental sulfur per acre before seeding using the Tiger 90 product (0-0-0-90).

A little did a lot 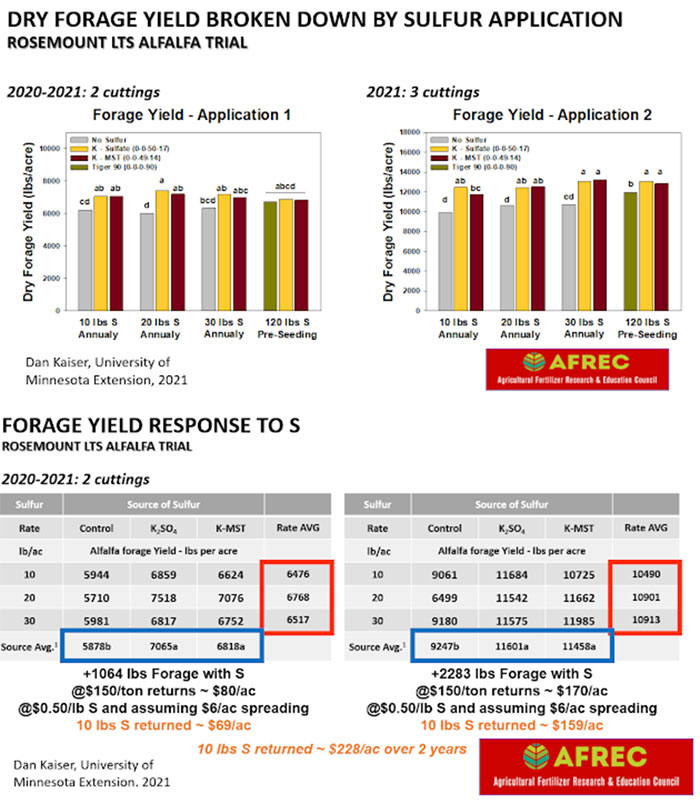 Similar results were found for three cuttings taken in 2021, but the yield gain due to sulfur was close to 2,300 pounds of dry matter for cuts two through four. As during the first year, there was no evidence that more than 10 pounds of sulfur was needed. The Tiger 90 treatment yielded significantly less than the other two sulfur sources.

The study also confirms the results from other trials that have shown reduced availability of the elemental sulfur and bentonite mixture.

Kaiser has established a second site in Morris, Minn., to study the impacts of sulfur on higher organic matter soils. “We will see if the 10-pound rate is sufficient over time or whether differences will be found as the stand ages, warranting higher rates of fertilizer.”

Stockpiled forage may not need nitrogen Next