The author is an associate research/extension professor with Mississippi State University. He’s based at the Coastal Plain Branch Experiment Station in Newton, Miss.

Over 2.5 million acres of nonirrigated dry hay are produced annually in Mississippi, Alabama, Louisiana, Georgia, and Florida, with an average yield of 5,750 pounds per acre. From 1976 to 2014, hay production per cow in the southeastern U.S. grew 136%. Reducing the dependency on stored feed in beef production is a primary objective of most management plans to enhance profitability of cow-calf production systems; however, it has been estimated that hay is fed for over 130 days per year on the average Southeast farm.

Despite the abundance of hay that is produced and fed, nutritive values are often too low to meet the dietary requirements of certain classes of beef cattle. This can be attributed to several factors, including forage species, fertilization, environmental conditions, harvest management, and storage and feeding practices.

Mean values for dry hay samples submitted to the Mississippi State Chemical Laboratory during the 2017 through 2018 growing seasons were 9.2% crude protein (CP) and 45.4% total digestible nutrients (TDN). A 1,200-pound mature cow that is two months postpartum requires feed consisting of 10.7% CP and 59.9% TDN. Significant improvements need to be made in hay production systems in order to account for these nutrient deficits.

Hay production in the Southeast, not unlike the animal side of beef cattle production, is often riddled with inefficiencies, particularly in the form of harvest frequency and fertilizer demands. Improved forage quality is often achieved through the combination of more frequent harvests and higher levels of nitrogen (N). Using elevated rates of N, combined with more frequent harvests, produces higher quality hay but often brings concerns of higher costs.

The total number of acres fertilized in Mississippi were essentially unchanged from 2012 to 2017, but expenses related to fertilization have declined substantially (28%) in that same time period. Though several calculators and tools have been developed for hay crop budgeting, producers are often reluctant to implement practices that result in higher quality hay.

Our hope is to further validate the necessity in adopting certain hay production practices by reinforcing the costs that are either saved or gained through their implementation.

A field trial was conducted during the 2018 and 2019 growing seasons at the Coastal Plain Branch Experiment Station in Newton, Miss. Four cultivars (two species) were evaluated: Pensacola bahiagrass (PEN), Argentine bahiagrass (ARG), Cheyenne II bermudagrass (CHE), and common bermudagrass (COM). Along with cultivar, total seasonal N rate (0, 100, 200, 300, and 400 pounds of N per acre per year) and harvest frequencies of 4, 3, 2, or 1 harvest per year, or every 30, 40, 60, and 120-day intervals, were applied to the plots.

The total amount of N per treatment was divided by four and applied to each plot. For example, the 200 pounds N per acre treatment received four 50-pound applications. The N source used in this trial was 33-0-0-12S. Dry matter and nutritive value were analyzed from each plot to determine yield and supplement requirements.

To assess total hay and supplement feeding costs, mean CP and TDN values were combined with assumptions for beef cattle nutrient requirements. Analysis assumed a 1,200-pound lactating cow that is two months postpartum with 19 pounds of peak milk and consuming 2.5% of her body weight each day.

Based on these requirements, we calculated the difference in CP and TDN required by the cow that is being consumed, and if the hay did not provide enough nutrients, the addition of a supplement was included. Supplements used in this analysis included soybean hulls (SH) and corn gluten (CG); however, for this article, we will only focus on the SH analysis. Hay production costs were calculated as the total cost of production per pound of CP or TDN for each treatment. These costs were estimated using the Mississippi State University Forage Planning Budget.

Costs included all operating expenses, such as spraying, fertilizing, baling, mowing, tedding, raking, and hauling (Table 1). The budgets also included machinery costs and interest in capital expenses. A cost per acre was determined using the forage budgets combined with field trial data. Differences between cost of production for harvest frequencies were calculated by multiplying cost per acre by the number of harvests. 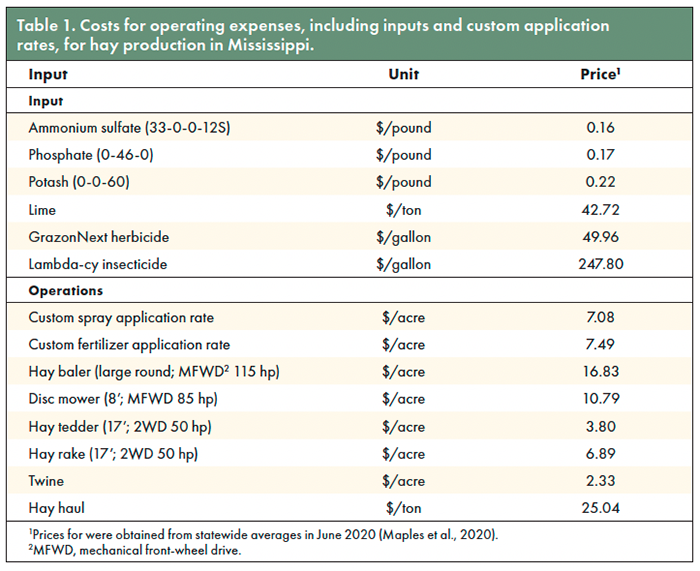 For the N treatments, a set cost per pound of N was determined and multiplied by the respective treatment rates. Supplement costs were determined by multiplying pounds of supplement needed by the price of SH (Mississippi state average in August 2020). The sum of the two feedstuffs (hay plus supplement) is the total feeding cost per head per day.

The total cost of hay production based on inputs and operational expenses per harvest minus N and custom application rates was $48.93 per acre. This value was used as the multiplier to determine cost per pound of dry matter for each harvest and N treatment. Mississippi state average cost for SH was $176 per ton. In general, as N rate increased, total feed costs declined (Figure 1). 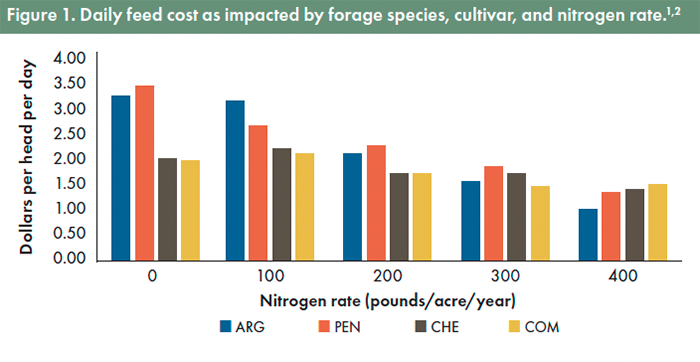 For harvest frequency analysis, costs for all cultivars with SH remained relatively stable until the 120-day harvest interval (Figure 2). Bahiagrass cultivars plus SH, in general, were greater in cost compared to bermudagrass cultivars. 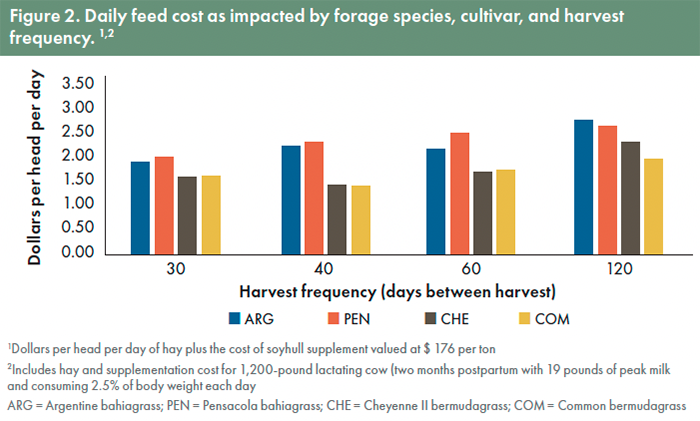 Evaluating feeding costs, specifically dry hay, in conjunction with supplementation, is often the most critical process in generating positive net returns in southeastern U.S. beef cattle production enterprises. Minimizing the amount of hay needed can be directly related to the quality of hay produced and fed. Results indicate CP content of hay can be maintained relatively high by applying annual N at rates of 200 pounds per acre or greater and harvesting at frequencies of 40 days or less. However, in terms of TDN, the forage crops tested in our trial were not capable of meeting the energy demands of lactating beef cows.

There are several other perennial warm-season species and cultivars, such as hybrid bermudagrass, that could be utilized instead of the seeded cultivars used in this analysis. However, supplementation would still be required to account for the energy deficit regardless of N rate or harvest frequency.

Total feeding costs were influenced most noticeably by the N rate and harvest frequency, which have greater impacts on bahiagrass versus bermudagrass. In general, higher N rates combined with more frequent harvests produced greater amounts of hay at a lower cost, reducing the amount of supplementation and total feed costs. It is evident from the variation in total feed costs associated with the results from this trial that producers should evaluate hay quality to make profitable economic decisions on supplementation needs.

Be smart when buying and selling hay Next