The next (likely) big alfalfa thing 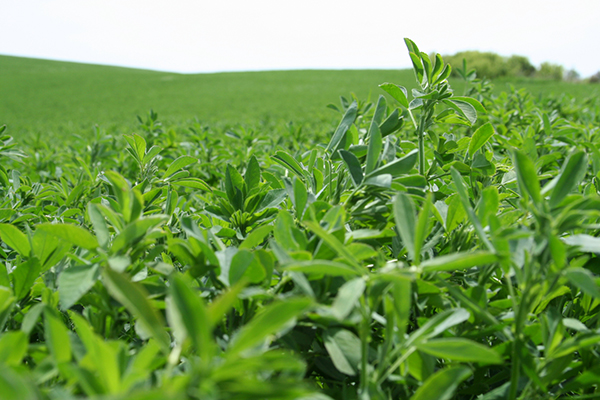 The reduced-lignin alfalfa era is barely out of the starting gate, and though we don't know for sure what its magnitude of impact will be, most industry experts agree that it will be significant. Without question, it's the biggest feed-quality change to alfalfa that we've seen in decades.

So in the spirit of human nature, where we're always looking for the next big thing that we don't have, let me suggest an alfalfa plant with consistent and optimal levels of condensed tannins. If, or when, such a plant ever makes it to the pages of a seed catalog, the impact on ruminant livestock farm profitability (dairy, beef or sheep) will be immense. Further, it will be a big win on the environmental front. These potential benefits were reinforced and discussed in detail at a symposium held recently as a part of the Crop Science Society of America’s annual meeting in Minneapolis, Minn.

What are tannins?
In succinct terms, tannins are chemical compounds that bind proteins and protein-breaking enzymes (proteases). They are found naturally in some forage legumes but less often in grasses. Not all tannins are created equal; some bind tightly with proteins, others do not depending on their chemical makeup. Tannins are also variable in where they are expressed in the plant and when they are expressed based on environmental conditions. This becomes problematic when breeding plants for just the right amount of tannin that will express across a wide range of environments and at different growth stages.

Alfalfa seed coats have small amounts of tannin, but the leaves do not. White clover has tannins in its flowers but not in the vegetative portions of the plant. The poster children of high-tannin forages are birdsfoot trefoil and sainfoin. Both species have tannins in their leaves. Other tannin containing forage legumes include lespedeza and crown vetch.

When high-quality alfalfa is fed to ruminant livestock, much of the protein is highly degradable and passes out the animal as nitrogen in the urine and milk. Certain types of tannins (such as those in birdsfoot trefoil) have the ability to lock on to this protein in the rumen and make it available later in the digestive process.

In research trials where birdsfoot trefoil silage was included in the diet of lactating dairy cows, protein utilization has been significantly improved. As a result, milk production increased and net income improved, as less soybean meal was needed. Furthermore, because more nitrogen was secreted in milk rather than urine, ammonia volatilization from manure was reduced by about 25 percent. Grazing studies with birdsfoot trefoil have also noted improvements in milk production or growth of livestock.

In addition to the protein utilization and nitrogen conservation benefits cited above, tannins in forages prevent bloat in grazing livestock and have lethal effects on certain nematode pathogens.

Though the benefits of tannins can currently be documented with some forages like birdsfoot trefoil and sainfoin, these species don’t possess some of the agronomic advantages found with alfalfa. For this reason, there is currently a consortium of science-based entities working toward the release of alfalfa varieties with leaves containing condensed tannins. It's not an easy task, but progress is being made. When successful, this next big thing will have huge profitability and environmental ramifications for the ruminant livestock industry.

Hay quality declines during storage Next

Taking stock for the stock Previous