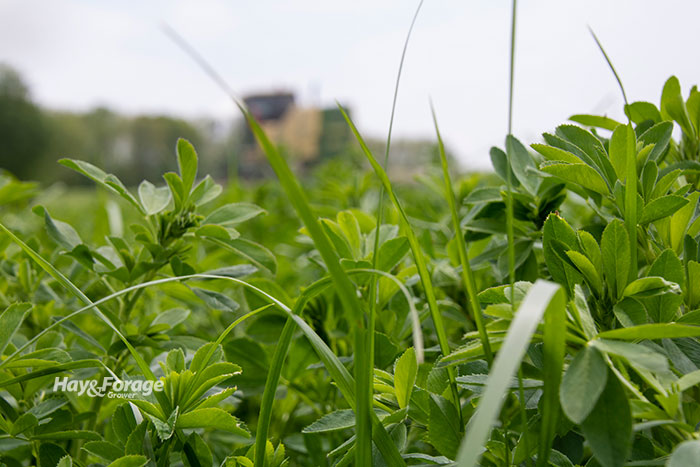 Thousands of words have been uttered or written touting the importance of a timely first-cut forage harvest. But what makes a harvest timely?

Although weather and available time often dictate when the first cutting is harvested, the forage’s destination from the standpoint of animal class might be the most important factor for determining if the cutting was timely or not, according to Ohio State University Extension specialists Mark Sulc and Bill Weiss.

“The lower value of the NDF ranges in the table should be the latest starting point to begin harvest, if weather permits,” Sulc and Weiss note. “This is because the cutting, field curing, and the harvesting process result in higher final NDF values than what it is at the time of cutting. Because forage quality changes so fast, it is better to start too early than a little too late,” the authors add.

Producers need to be especially vigilant if grasses are being harvested. They mature quickly, and the optimal harvest window can be only a few days.

According to Sulc and Weiss, high-quality grass forage (50% to 55% NDF) destined for lactating cows needs to be cut in the preboot to very early boot stage in the spring. At this stage, the grass stem will have one to two palpable nodes on the lower stem and no emerged seedheads.

“As soon as you see flowering heads emerging in the grass, the NDF is most likely just over 55%,” the specialists assert. “As harvest is delayed, the NDF levels will quickly increase to 60% or higher. Maturity of the grass has a much bigger effect on forage NDF level than does grass species,” they add.

Subsequent alfalfa harvests after the initial one can be cut in the bud to early bloom stages (about every 30 days) for excellent quality. Bud-stage alfalfa will usually contain 22% or higher crude protein (CP) and 40% NDF, while early bloom alfalfa will average 20% CP and 40% to 45% NDF.

The specialists point out that protein and NDF are not strongly correlated and that CP concentrations can be much higher or lower than expected. They recommend that a good compromise to extend the stand life of alfalfa on a dairy operation is to harvest at least one cutting in the early bloom stage during the summer months.

“The first two cuttings should be taken near 40% NDF, and later summer cuttings can be taken in the early bloom stage,” Sulc and Weiss suggest. “The NDF content of alfalfa declines more rapidly with maturity early in the season, so the late-summer harvests can be made at a later maturity stage without as great of a penalty on forage quality.”

For many years, growers and consultants have been using the Predictive Equations for Alfalfa Quality (PEAQ) to estimate the forage quality of a standing crop. According to Sulc and Weiss, the PEAQ estimation procedure for alfalfa NDF works well in all cuttings and for all types of alfalfa, including reduced lignin varieties.

Depending on location, subsequent cuttings of high-quality pure grass stands should be taken every 24 to 28 days. A delayed cutting longer than these intervals greatly reduces nutritional value of grass forage.

Pay attention to tire pressure Next

A good grass with a reputation problem Previous