Will alfalfa autotoxicity ever be solved? 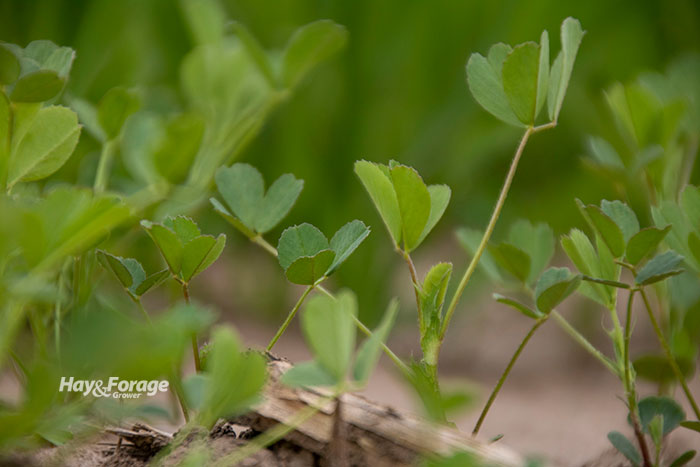 There are several situations when the ability to seed alfalfa after a killed alfalfa crop might be the desired play. It certainly would be a “go-to” practice for many commercial alfalfa growers whose primary crop is alfalfa. Unfortunately, those growers must still revert to a rotation crop that is sometimes unwanted or has a lower value than alfalfa.

As with factors that influence winterkill, there’s still much to learn about alfalfa autotoxicity, which is the name given for an alfalfa plant’s toxic chemical influence on the establishment of a new alfalfa plant from seed.

Research to quantify and mitigate alfalfa autotoxicity has been ongoing for more than 40 years, although the studies are few and far between. The recommended minimum alfalfa after alfalfa plant back interval from the research has ranged from two weeks to one year.

A part of the problem with alfalfa autotoxicity is that there isn’t always a dead or alive outcome. Sometimes new plants never establish, and sometimes they do but with some degree of lower production potential.

The underlying toxic chemical is mostly found in the alfalfa herbage (leaves and flowers) and is water soluble. The chemical causes delayed germination, inhibition of root growth, and a lack of root hairs. Some scientists think medicarpin is at least partly responsible.

Soil type and environmental factors, especially precipitation, seem to play an important role in how quickly the toxic chemicals leach below the root zone. Being water soluble, the autotoxic chemical will move below the root zone of a sandy soil more rapidly than that of a loam or clay soil. Conversely, the immediate impact of autotoxicity is more pronounced in a sandy soil.

Tillage affects the level of toxin in the soil. More aggressive tillage will mix and dilute the toxins. Wisconsin research showed the effects of autotoxicity to be greater in no-till fields than those that were moldboard plowed.

The age of the existing alfalfa stand will also affect autotoxicity. Younger plants (those one year old or less) contain fewer toxins than older plants. For this reason, seeding alfalfa after a failed new seeding is rarely a problem.

Back on the research trail

Kim Cassida, a forage extension specialist with Michigan State University, is making efforts to try and unlock some of the mysteries of alfalfa autotoxicity and help farmers determine if a field is safe to plant back into alfalfa.

In addition to all of the factors that impact alfalfa autotoxicity that were previously mentioned, Cassida has found that alfalfa genetics appears to have an influence. Several studies have shown differences in variety response when they were subjected to alfalfa root extracts. She suggests that this might be because varieties differ in the amount of toxin produced by the initial variety and/or there are tolerance differences in the variety being seeded. The forage specialist also surmises that soil health might play a role, thinking that higher microbial activity could be beneficial.

During the past few years, Cassida has been involved in developing an alfalfa autotoxicity bioassay. She places soil on top of an agar medium in a flask. Seed is then planted into the soil, and within a few days the roots make their way into the agar medium where they can be observed.

The goal is to provide a means such that farmers would be able to submit soil samples from fields targeted to be seeded to alfalfa. They also would submit a small sample of seed they plan to plant. Within a few days, the degree of autotoxicity would be known and reported back to them.

Cassida has been able to detect significant response differences for both soils and alfalfa varieties. She’s working to fine-tune the bioassay for eventual commercial use and needs to verify results by growing alfalfa in soils identified as high or low autotoxicity risks. Verification studies are being done in the greenhouse and on farms.

Until more is known, and to ensure alfalfa autotoxicity won’t be an issue, most forage experts suggest waiting at least a year before reseeding alfalfa back into the same field.

If you want to thicken an alfalfa stand, use a species other than alfalfa. Some producers routinely seed orchardgrass or ryegrass into existing, thinning alfalfa stands just to get another few years of production. Red clover is another option.

Ponderings on high-priced potassium Next