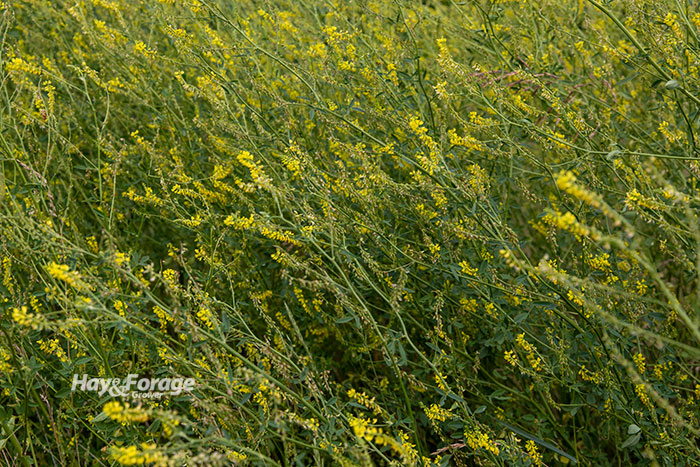 When we talk about clovers for haying or grazing, species such as red clover, white clover, ladino clover, alsike clover, crimson clover, and others come to the immediate forefront. One prominent clover species that rarely gets mentioned is sweetclover.

A biennial, sweetclover stays vegetative during the first year and then flowers, produces seed, and dies during the second year. There are both white and yellow-flowered species, which can dominate roadsides and areas where most other species won’t establish and grow. 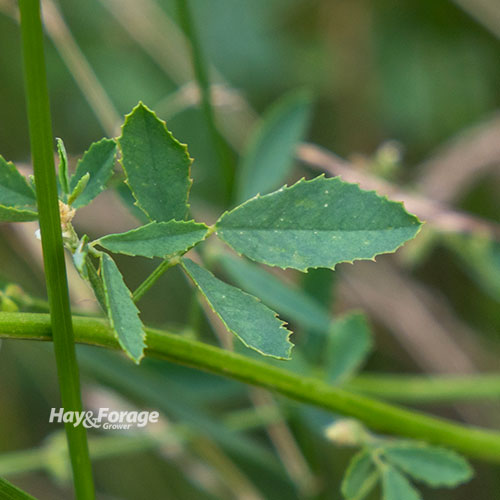 Unlike alfalfa, sweetclover leaflets are serrated around the entire margin.

Although sweetclover grows in many states, its epicenter as a forage crop is North Dakota and South Dakota. As a legume, sweetclover is high in protein and quite digestible if it’s harvested early.

There is one problem

Sweetclover comes with a major concern as a forage crop — a livestock condition known as sweetclover poisoning.

“A problem with sweetclover occurs when the hay is put up too wet and molds in the bale,” explains Ken Olson, a livestock specialist with South Dakota State University. “Sweetclover contains a substance called coumarin, which is converted to dicoumarol by mold in hay. Dicoumarol is an anti-clotting agent that will cause livestock to hemorrhage (bleed).”

Internal bleeding can be difficult to diagnose just by viewing the cattle. Black, tarry manure from internal bleeding into the intestinal tract is one symptom of sweetclover poisoning. Severe levels of poisoning can lead to abortion in pregnant livestock and ultimately death.

“The conversion of coumarin to dicoumarol can occur even if there is only a little mold in the hay, so mold level is not a good indicator of the dicoumarol level,” Olson notes. “Baling into large, dense bales can make the problem worse because mold formation in damp hay will be highest at the core of a large bale.”

Needless to say, the best prevention of poisoning is to be sure the hay is adequately dried before baling. This is easier said than done with sweetclover because its stems are generally large and take time to lose moisture.

Olson suggests that one option is to cut sweetclover at a relatively immature state before thick stems are formed. Once the crop reaches full bloom, the stand will need extended time to dry. Harvesting at a less mature stage will also lead to higher forage quality. 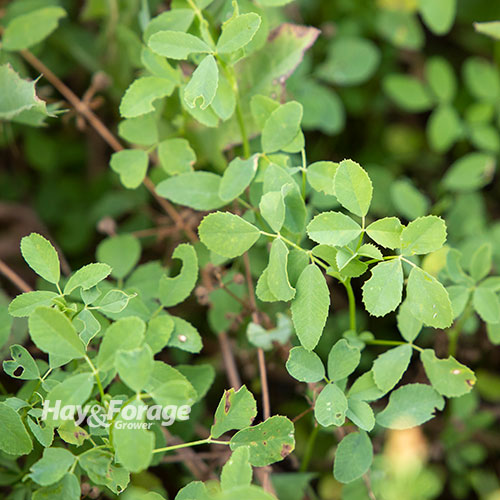 Vegetative sweetclover is high in protein and digestibility.

“Making baleage rather than (dry) hay may be an option, especially in a wet year,” Olson says. “As long as the plastic covering is airtight, the forage is preserved with essentially no mold growth. Once the bag is opened in the winter, the cold temperatures should limit mold growth while the bales are being fed,” he adds.

If mold is suspected in either hay or baleage once they are in storage, getting the forage tested is a necessary next step. The North Dakota State University Veterinary Diagnostic Laboratory provides a test for forage dicoumarol level. Olson suggests contacting your veterinarian to submit samples of suspect hay.

If dicoumarol is detected in the forage, there are several options. If the feed has a low dicoumarol concentration, it can be blended with feeds that do not have dicoumarol to dilute the feed mixture to a safe level. Another option is to switch every other week between the sweetclover hay and another hay without sweetclover.

“While these approaches lessen the severity of the poisoning, caution is still needed, including close observation for symptoms of poisoning,” Olson emphasizes. “It is important to not feed hay that contains dicoumarol to cows that are near calving or during the calving season. Also, do not feed dicoumarol-containing hay to calves or other classes of livestock that will undergo surgical procedures, such as castration or dehorning,” he adds.

In conclusion, Olson asserts that sweetclover hay can be an excellent feed as long as the dicoumarol level is known and feeding management is used to prevent poisoning.

There are consequences for cutting too low Previous