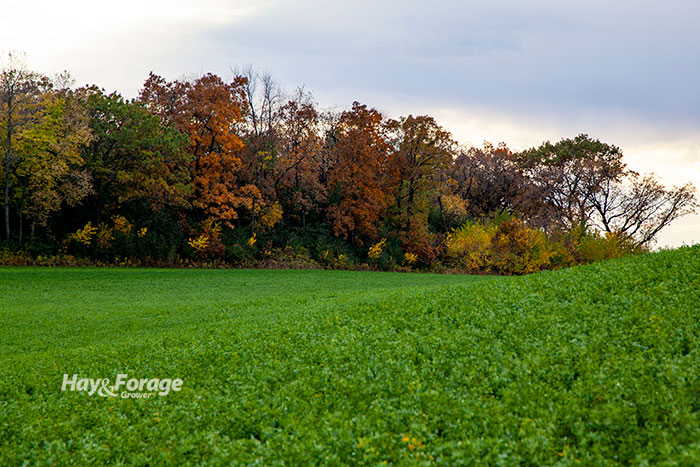 There comes a time in the life of every alfalfa stand when you must say goodbye. Even with careful nurturing, all alfalfa fields lose productivity over time.

There are many reasons for alfalfa termination. In addition to low productivity, stands can be subject to weed encroachment, previous winter injury, or growers may simply stick to a rigid rotation plan and move on to the next crop.

Whatever the reasons for termination, research and farmer experience suggest that there are benefits to killing alfalfa in fall rather than waiting until next spring. These advantages include:

1. Glyphosate works better in the fall when plants are actively translocating nutrients to their roots. Even so, fall-applied glyphosate alone does not often provide a complete kill of alfalfa. Glyphosate, of course, is ineffective on Roundup Ready alfalfa but may be used as a tank mix if perennial grasses have encroached into the stand.

2. If growth-regulating herbicides such as 2,4-D or dicamba-based products are used, there’s less risk of injury to neighboring fields or susceptible border plants compared to spring. Plant-back restrictions are also not an issue as they might be in the spring.

3. A fall kill allows for an earlier planting date in the spring. This might be the most important advantage, as 4 to 6 inches of alfalfa growth are needed before a spring herbicide kill. For crops like corn, delayed planting generally translates to a lower yield.

4. Killing stands in the fall allows more time for the alfalfa residue to decompose and perhaps earlier nitrogen availability for the subsequent crop.

Tillage alone is not highly effective in killing alfalfa unless it’s aggressive enough to sheer roots. Such tillage is not often an option for highly erodible soils.

Herbicides need to be applied before a fall killing freeze and when there is sufficient alfalfa vegetative growth. Ideally, temperatures for a few days following the application should be above 50°F. Often the combination of an herbicide application followed by some tillage a week or more later provides the best control.

An effective herbicide kill needs to be based on the composition of the stand. Although growth-regulating herbicides such as 2,4-D and dicamba in combination are generally successful for terminating alfalfa, they won't kill perennial grass species. As previously mentioned, this is when glyphosate must be added to the herbicide mixture.