It’s difficult to deny that our climate is changing. For the remainder of this century, climate experts expect most of us to experience a warmer environment with more intense weather events.

How will these changes impact our cool-season grass pastures and hayfields?

That’s a question Rebecca McCulley set out to answer in 2009. The University of Kentucky agroecologist initiated a five-year field study to examine how forage production, quality, and fescue toxicity might be impacted by rising temperatures, higher rainfall, or both at the same time. She discussed her study’s results at the American Forage and Grassland Council’s Annual Conference last week in Winston-Salem, N.C.

McCulley established small field plots just north of Lexington, Ky. For the heated plots, overhead heat lamps were used to raise the temperature by 3°C (5.4°F) above the existing outdoor temperature, which is the predicted temperature change through the second half of the century. Additional water (about 30% more) was added to the plots on days when normal rainfall occurred to mimic the higher intensity of rainfall events predicted in the future.

The plots were seeded to toxic and novel endophyte tall fescue, Kentucky bluegrass, and red and white clover. Once established, some bermudagrass sprigs were introduced. The experiment ran continuously for five years (2009 to 2013). The plots were managed as a three-cut hay operation might be.

Initially, heat dramatically reduced forage production, but that trend reversed during the first fall. In most years, heat in the spring was beneficial for stimulating forage growth. Over the entire five-year period, additional heat boosted forage production by 19%.

As the plots aged, clover composition declined and the cool-season grasses began to dominate; however, their growth was reduced more after spring, especially in the heated plots. 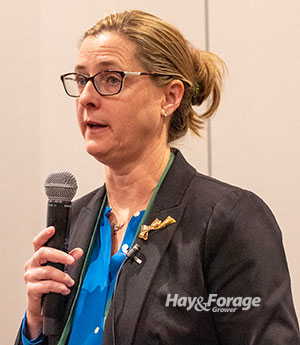 “The reason for the reduced cool-season grass growth in the heated plots is because warm-season species such as crabgrass (not seeded) and bermudagrass were more prominent,” McCulley said. “These warm-season species were largely responsible for the overall improvement in forage production under the warmer conditions.”

McCulley wanted to measure the impact of climate change on the toxicity level of infected tall fescue. Included in the experiment were both toxic endophyte-infected and novel endophyte varieties. Fescue tillers were sampled every year to test for toxicity level.

McCulley summarized by saying that our current cool-season pastures should be quite resilient to the forecasted changes in our climate. She expects pastures in Kentucky to have more warm-season grasses in the future with overall higher total-season forage yields. However, ergot alkaloid toxicity will intensify for cattle grazing stands of Kentucky 31 tall fescue.

Rodenticides targeted for significant changes Next