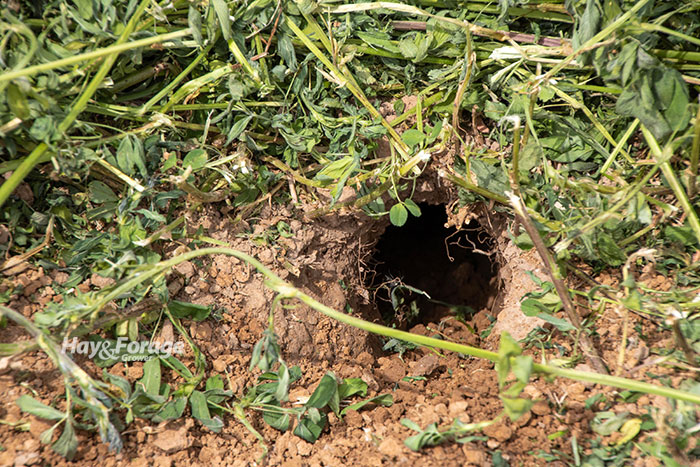 Rodents are a major pest of alfalfa and other forage crops. Their control has never been easy given their belowground nature of existence. In alfalfa, rodents such as pocket gophers, meadow voles, and ground squirrels cause reduced yields, equipment damage, and loss of plant stands.

Using some form of a rodenticide is generally considered the most effective control approach. Recently, the U.S. Environmental Protection Agency (EPA) released a list of proposed interim decisions (PIDs) for public comment. If these changes become law, it will substantially alter if and how rodenticides may be used to manage rodent pests in the near future.

According to information provided on the University of California Cooperative Extension Alfalfa & Forage News blog, all rodenticides are currently under review. These include first-generation anticoagulants (FGAR), second-generation anticoagulants, zinc phosphide, strychnine, bromethalin, and cholecalciferol. Of these, only the FGARs, zinc phosphide, and strychnine have labels for use against field rodents, but not all of these active ingredients can be used for all rodent species.

The blog article lists the following significant changes being proposed:

2. Aboveground applications would be eliminated in rangeland, pastureland, and fallow land. This is a substantial deviation, as most applications in these areas have traditionally been through broadcast applications or spot treatments. This change would leave only bait stations for ground squirrels and voles.

3. Within-burrow applications of FGARs will generally not be allowed in cropland during the growing season. This would eliminate FGAR application for pocket gophers for much of the year and would eliminate it for all uses in some crops.

4. Carcass searches will be required every day or every two days (starting three to four days after the initial application), depending on the product used and where it’s applied for at least two weeks after the last application of the rodenticide. When carcasses are found, they must be disposed of properly. Any non-target mortalities must be reported to the U.S. EPA. Collectively, this will require a major increase in labor, potentially making rodenticide applications impractical in many settings.

5. Extensive endangered species designations are anticipated that will limit or eliminate the potential to apply rodenticides. This could have large-scale impacts, although the full extent is not known at this time.

6. New labels will require the use of a PF10 respirator and chemical resistant gloves during application. This is a substantial change for some rodenticide labels, requiring fit testing for all applicators, with the requirement of respirators ultimately making rodenticide application more physically challenging.

The EPA has established an open comment period, but time is running short. Comments can be made through February 13. If you would like to comment on these proposed changes, the required links and useful guidance can be found at the following website: https://responsiblerodenticides.org/.

People may also comment on these proposed changes to your Senate and Congressional representatives. If you are unsure who they are or how to contact them, visit https://www.congress.gov/contact-us.

Look for frost damage in winter annuals Next