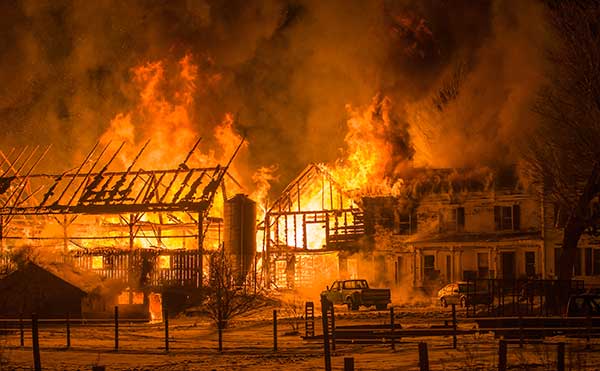 Already this season there have been reports of hay heating and a couple of stack fires. As many areas of the United States have been on the receiving end of persistent rain, hay growers have done their best to get the crop harvested. Under such conditions, it’s always a good practice to keep an eye on hay that was harvested on the marginal side to too wet.

Temperatures up to 120°F. Normal respiration by fungi and bacteria in wet hay cause the temperature to rise; this process often is called normal sweating during hay curing. Most people can hold their hand or arm in the hay for 30 seconds under such conditions. This level of heating occurs in hay baled at 15 to 20 percent moisture. These temperatures generally do not cause serious concern in forage quality loss. Mold or mustiness may develop at this temperature range.

110° to 150°F. Heating is caused by respiration of fungi able to grow at temperatures in this range. Most people cannot hold their arm in hay very long if the temperature is greater than 120°F. Chemical reactions during heating cause some of the protein and fiber to become less digestible and the hay to caramelize, giving it a tobacco-cured color and aroma. The loss in digestibility is greater at these temperatures than at lower temperatures. If the excess heat can dissipate from the stack or bale, temperatures seldom increase above 130° to 140°F.

175°F. Continue to check the temperature every few hours. Notify the fire department that you have some very hot hay and work with them for recommendations for further action.

195°F or hotter. Hay stored at 195°F or hotter can create a dangerous situation. Spontaneous combustion is possible. Do not attempt to move hay without fire department assistance.

Grazing cattle gain with ionophores Next

When the sun doesn’t shine Previous