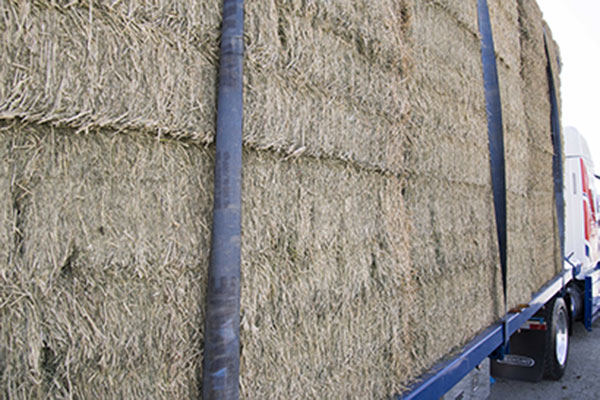 Let’s make this easy — use RFQ, not RFV. You can stop here, or continue to read on.

The relative forage quality (RFQ) metric for indexing forage nutritive value has now been around for over 15 years. Though widely used, it is common to see its predecessor, relative feed value (RFV), still bandied about at an unusually high frequency. It just seems to hang around like a stray tomcat.

Before trashing RFV too much, let’s get it out there that the index performed a great service to the forage industry. Some 30 years ago, it totally shifted the focus of alfalfa evaluation off of crude protein and into the realm of fiber analysis. Though not a measure used for balancing rations, it provided a means of indexing forage for marketing purposes. The concept sold like hot dogs at a baseball game because it was easy and defendable with the day’s evaluative knowledge. But times have changed.

One problem with RFV is that it was developed solely for use on alfalfa. Many people tried to expand its utility to other forages such as grasses and corn silage; the result made most other forage types look much worse than they really were. Without delving into the equations, RFV failed to take into account the fact that not all fiber is created equal in terms of digestibility. Enter RFQ.

RFQ is not perfect, but like RFV it does offer a one-stop shop to initially evaluate the quality of a forage. Better yet, it gives grasses their fair due and takes into account the impacts that growing environment (moisture and temperature) has on forage fiber digestibility. RFQ further improves on RFV by using summative equations to estimate total digestible nutrients (TDN), taking into consideration nonfiber carbohydrates, crude protein, and fatty acids.

For several years, I was involved in measuring the yield and forage quality of alfalfa fields that spanned across Wisconsin. For two of those years, 2010 and 2011, I compared the RFV and RFQ values for each cutting from every field. The values for first cutting in each year are presented below. 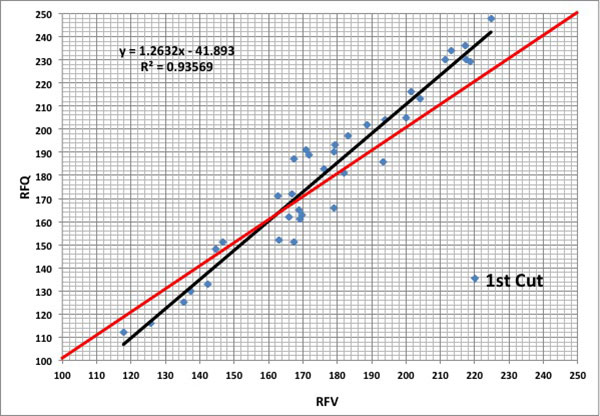 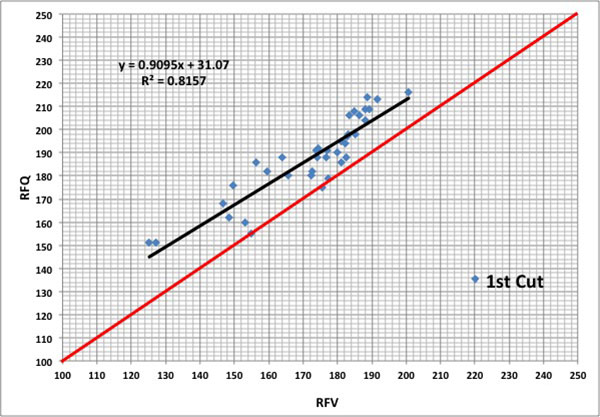 The red line in each graph depicts a one-to-one relationship. In other words, if RFV and RFQ were exactly equal, the data points would fall on the line. Rather, what we see is that for higher quality samples (mostly those cut early), RFQ is greater than RFV (data points above the red line). This held true in both years. In 2010, as maturity advanced and forage quality declined, RFV was often higher than RFQ (data points below the red line). RFQ penalized the forage for lower fiber digestibility; RFV did not. This is what I’ve found to be the normal trend for first and subsequent cuttings.

The next year told a different story, primarily because temperatures stayed relatively cool throughout the earlier than normal harvest window. The lesson is that 150 RFV forage may be 150 RFQ, or it may have a RFQ value significantly higher or lower than 150. Species, maturity, and growing environment (especially temperature) will dictate actual fiber digestibility. It’s more likely that RFQ will better reflect how the forage actually “feeds.”

The ramifications of the differences between RFV and RFQ are quite large for both the buyer and seller of hay. Even if cut at the same maturity, forage grown in a hot, arid environment is different than that grown in a higher elevation where night temperatures are cool. RFQ will better assess and reflect these differences. Better yet, RFQ will more accurately predict how your animals will perform.

To be sure, RFQ has limitations. As we learn more about the importance of rate of fiber digestion, it may be that a new metric will emerge in future years. Currently, however, RFQ is easily the better play over RFV, which from a hay marketing perspective needs to go into the Forage Hall of Fame but off forage analysis lab sheets and “hay for sale” ads.

The curious case of reed canarygrass Next