The curious case of reed canarygrass 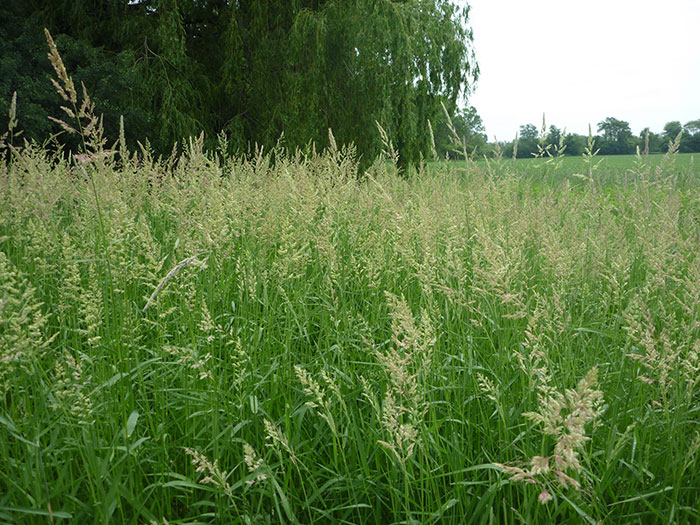 Perhaps no forage species is as perplexing and invokes such a wide range of emotions or adjectives as reed canarygrass.

I learned this lesson early in my former career in extension when I authored a fact sheet on this grass species that explained its virtues as a forage resource for dairy producers who had fields that were too poorly drained for alfalfa persistence. It wasn’t long afterward that I received a scathing letter in the mail from one of the university’s environmental science departments. In essence, I was told what orifice might work for filing my fact sheet.

To be sure, reed canarygrass can take over and dominate a wetland, choking out more desirable plant species. The term “invasive” only scratches the surface as to how quickly native (wild) reed canarygrass can spread over a natural habitat with its aggressive rhizomatous root system.

Reed canarygrass has also been faced with the deserved stigma of having high alkaloid content. Depending on type, alkaloid compounds reduce palatability and/or cause diarrhea. Animal performance has been negatively correlated with alkaloid concentration.

In spite of the negative characteristics associated with native reed canarygrass, farmers have found ways to utilize the species during periods when marshy areas dry out as the growing season progresses into summer and fall. Often, these areas are grazed or the overly mature plants are cut, dried, and baled for feed or bedding.

Forage agronomists and breeders have long recognized the desirable characteristics of reed canarygrass as a forage resource. It tolerates a wide soil pH range, has outstanding persistence, provides better than average forage yields, tolerates any type of cutting schedule, and thrives in both dry and wet soil conditions.

Improved varieties of reed canarygrass have been developed over the years that have low alkaloid content and enhanced dry matter production with adequate nitrogen fertilization. When cut prior to seedhead emergence, these varieties have great utility as a companion grass in a legume mixture or as a pure stand for harvesting as hay or haylage. Pure reed canarygrass stands provide an outstanding outlet for manure applications during times of the year when spreading sites are at a premium.

From an agronomic perspective, reed canarygrass is ironically slow to establish given its ferocious propensity to persist once established. I know of farmers who have been cutting the same pure reed canarygrass stands of improved varieties for over 20 years. Because these fields are more intensively managed, invasiveness into other fields or field boundaries has not been a problem.

In a recent edition of South Dakota State’s iGrow newsletter, Pete Bauman described a personal experience with native reed canarygrass that was growing in a wet area of his pasture. Bauman, an extension range specialist with SDSU, discovered a dead 950-pound Angus heifer last fall in a small area dominated by reed canarygrass.

Bauman explains that several light frosts had occurred within the previous week of the heifer’s death. The reed canarygrass forage consisted of both frost-damaged plant tissue and young, green tillers.

Eliminating other possible causes of death as at least very unlikely, Bauman surmised that this case had all the signs of prussic acid poisoning. But it wasn’t a sorghum species usually associated with prussic acid; this was reed canarygrass.

Bauman did some research and talked to other experts at SDSU. He learned that certain lines of wild reed canarygrass could accumulate prussic acid. Still, the body of knowledge was limited and inconclusive.

Plant samples were taken and analyzed for prussic acid. All of the samples taken over the course of several weeks contained prussic acid but at levels below what would be considered as risky to graze (500 parts per million).

Though Bauman couldn’t confirm that the heifer died of prussic acid poisoning, he says, “While all tests indicated that the prussic acid level in the samples was below the level of concern and cannot be definitively identified as the cause of mortality, the facts that prussic acid was present and persistent, that no major change in diet occurred, and that a heifer suffered mortality while foraging primarily on reed canarygrass is worth a note of caution if using reed canarygrass as an early spring or late fall forage.”

Reed canarygrass will continue to be a “hot button” forage species with both proponents and opponents. Feel free to let your views be known in the comments’ section below, but let’s keep it civil.