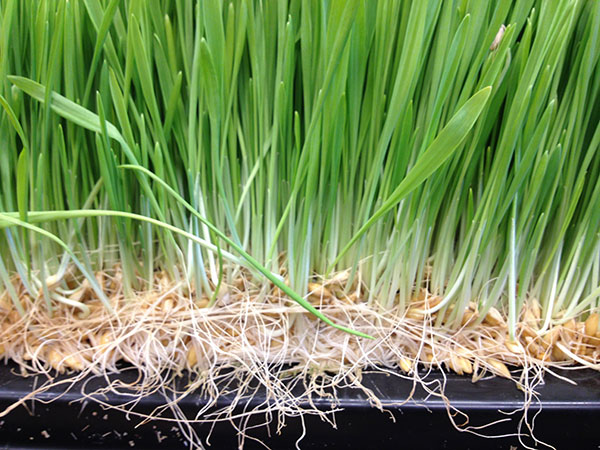 Photo courtesy of University of California.

Claims that substantial amounts of water can be saved by growing forage hydroponically have attracted interest in the practice.

But does this practice really save water?

To determine if this is true, UC-Davis researchers undertook a study in 2013 to measure the water use efficiency (WUE), feed quality, and economics of producing sprouted barley seeds as an animal feed. The results were recently shared in UC-Davis’ Alfalfa and Forage News.

The researchers found that seeds lose considerable dry weight as they sprout. This loss multiplied as the days sprouted grew. Production of sprouts from grain seeds resulted in less feedable dry weight than the seeds prior to sprouting. “Barley grain itself is far superior to sprouts in water use efficiency due to lack of losses after harvest,” Putnam says.

The sprouts did have good nutritional quality. About 15 percent of the dry weight was protein and they were very low in structural fiber, so the sprouts appeared to be quite palatable.

The WUE, which is found by dividing the dry weight produced by unit water used in sprouting, is actually negative for the sprouts. This is due to a loss in feed quantity caused by the use of seed-stored carbohydrates during germination. Much of the carbon is released as carbon dioxide. There’s a 25 to 30 percent loss in dry weight of the seeds once sprouting occurs. In other words, adding water to a 100-pound bag of barley would provide about 75 pounds of feed to the animal, resulting in a negative WUE.

According to Putnam, the WUE of feed production is superior with hay or grains compared to sprouts. It is almost always higher in hay crops than grains since 100 percent of the biomass of the crop is harvested compared with less than 50 percent for a grain harvest.

From an economic perspective, production of the sprouts on a dry weight basis cost substantially more than feeding barley seeds directly or purchasing hay.

Using data from a 2014 Oregon State study, Putnam estimated the hay equivalent price of sprouts to be about $580 per ton when hay is valued at $100 per ton with 10 to 13 percent moisture. “This is very pricey compared to recent prices for alfalfa and grassy hays in California that range from $70 to $235 per ton hay equivalent price,” Putnam notes.

It is important to consider the overall water use for crop production when evaluating WUE and the economics of a feeding system. The sprouting concept just does not measure up when compared to other feed production alternatives.