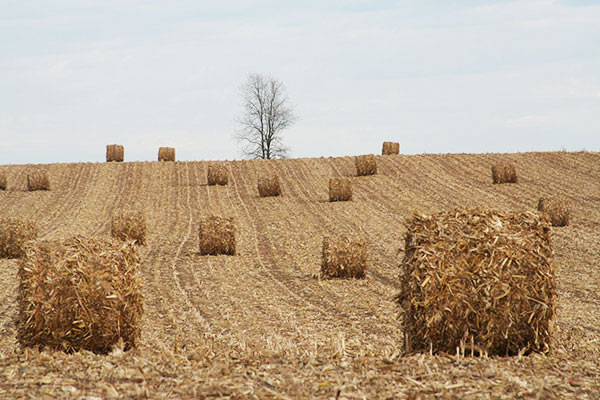 Though incorporating or leaving corn residue on the soil surface in fields is a common practice, harvesting residue can provide a beneficial feed source during the winter.

However, if all residue is removed from a field and other sources of carbon are not added, soil productivity will decline.

So how much crop residue removal is too much?

Different amounts of residue are removed through various baling methods. Chopping, raking, and baling the stalks remove 80 percent of the residue compared to baling the windrow behind the combine, which only removes 50 percent.

Bruce Anderson, University of Nebraska-Lincoln extension forage specialist, suggests sampling and testing the bales as soon as possible after baling to understand the nutritional value in order to best feed them.

Start by testing for protein and energy content, which can vary greatly in cornstalk bales. “I’ve seen protein as low as 3 percent and as high as 7 percent,” said Anderson.

Dry, pregnant cows require 7 to 8 percent protein in their diet, so high protein bales would only need a little protein supplemented. However, bales with 3 percent protein will need a significant amount of supplement to meet cows’ needs.

Most bales have adequate TDN levels of about 60 percent. Feeding cornstalk bales with adequate protein supplement should meet cows’ needs until calving. If stalks are rained on, the TDN can drop below 50 percent, so cows will need extra energy. Also, if the corn crop endured stress like hail or drought, test for nitrates to be sure levels are safe.

Include nutrient removal from the field in calculations when considering the economics of baling and hauling residue off the field. For example, a 1,200-pound bale of cornstalks removes about 19.2 pounds of potassium, 11 pounds of nitrogen, and 3.5 pounds of phosphorus per acre.

“While it is critical to maximize profitability from the land, balance short-term economics with long-term sustainability,” DeJong-Hughes said. The guidelines below can aid in maintaining soil organic matter levels and protecting fields against soil erosion.

· Target corn residue harvest in fields that will be planted with corn the following year.

· Rotate residue harvest among fields to avoid removing it from the same field every year.

· Apply manure in addition to or instead of commercial fertilizer to add carbon to the soil.