Keep more bale for your buck 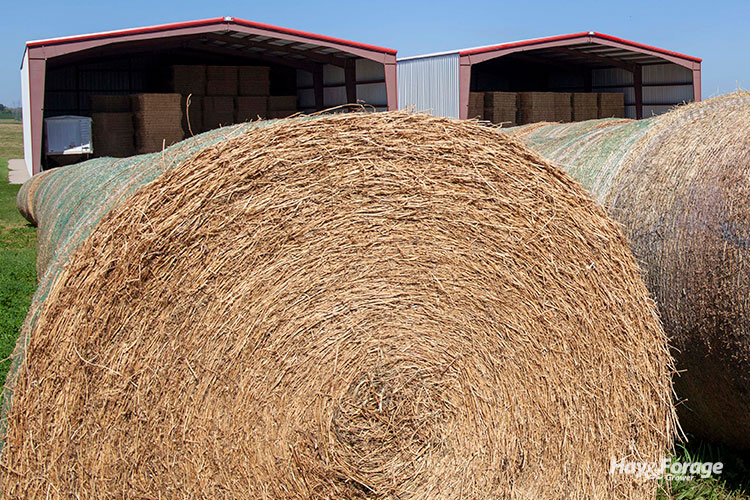 Lots of hard work goes into making quality hay before first cutting is even swathed, so letting storage conditions degrade the quality, and in some cases, the quantity of the hay you worked so hard to make doesn’t make sense. University of Nebraska-Lincoln (UNL) Extension Educators Brad Schick and Ben Beckham recently reported many of the ways that hay can suffer from storage damage along with methods to prevent these losses in the UNL Beefwatch newsletter.

The first step in preventing storage loss is to produce a tightly wrapped, densely packed bale at the proper moisture. Baling at correct moisture levels results in hay curing without excessive heating, mold growth, and dry matter loss. Maintain moisture levels below 20% for this to occur.

Not every forage lends itself to dense packing, but fine-stemmed hay made from grasses, small grains, and alfalfa are among those that generally make for tight, well-formed bales. Using a wrapping material that will keep the hay tight for an extended period can also prevent storage losses. Plastic sleeves and net wrap may physically block water from entering the bale, whereas twine wrapping is not able to do this.

Bale type also plays a role in storage loss. Round bales with layers going with the curve enable water to runoff the sides of the bales, allowing only small amounts of water to wick into the bale. A square bale’s flat top does not allow water to roll off. Instead, water sits on top and soaks into the bale.

Many haymakers say that you will pay for a hay barn whether you build one or not. Considering the projected losses for outdoor storage, this may be more than just a saying but a fact.

Round bales are not as easy to store inside a barn or shed, but it is still important that they be covered or placed in a way that prevents moisture wicking.

When storing bales outside, keep the base dry. Hay can wick moisture through the bottom of the bales as well as the top. The Nebraska extension educators recommend storing hay on an elevated or well-drained surface such as old tires, crushed rocks, concrete, pallets, or railroad ties.

If bales are stored outside, consider using a tarp to cover the bales. Tarps will help protect bales from rain and wind without the investment of building a hay barn. The storage area still needs proper drainage, and, by stacking or pyramiding bales, you can cover more hay in a smaller area with less tarp compared to a single level of in-line bales.

If indoor storage or tarping are not feasible on your farm, consider how you place your bales when they will be exposed to the weather. For round bales, placing them end-to-end in rows 3 feet apart minimizes bale exposure and allows adequate airflow. Find an area with natural slope to store your hay. The slope causes water to run off instead of pool at the base of the hay.

No matter the type of bales, do not store hay under trees. When it rains, the trees will prevent the bales from receiving sunlight and airflow, which are two key factors in drying out bales after a precipitation event. If wind is a problem in your area, consider building windbreaks away from tree lines, in a well-drained area.

The extension educators cite a study performed with prairie hay in South Dakota that showed hay stored for one year, end-to-end, had a 1% dry matter loss. Individually stored bales had a 4% loss, and pyramid storage had a 10% loss in dry matter.

The type of forage will play an important role in storage decisions. Beckham and Schick note, “Alfalfa is much more valuable and more susceptible to damage than grass hays when being stored. Other forages that are difficult to form a tight bale, such as sudangrass and millets, are highly susceptible to moisture penetration.”

Apart from the technical aspects of haymaking, selling hay as early as possible can reduce the amount of time hay is stored on your farm and, therefore, the need for indoor storage.

The two faces of sericea lespedeza Next