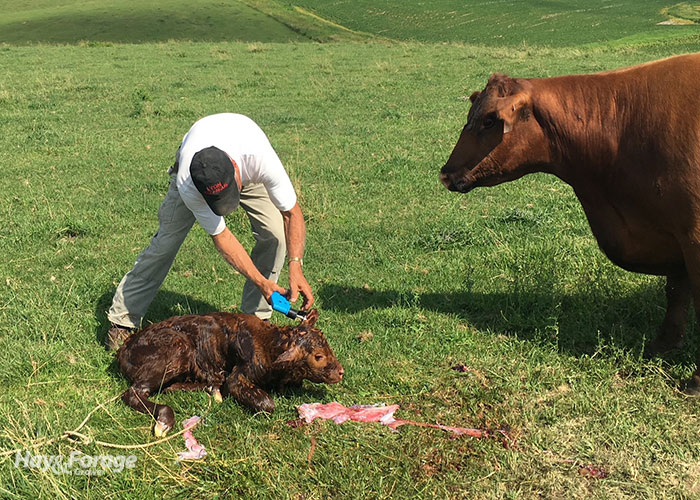 As cows near the spring calving season, when you offer feed each day has an impact on the time of day when calves will be born.

“Research indicates that feeding cows later in the day and evening will increase the number of calves born during daylight hours,” states Adele Harty, a cow/calf field specialist with South Dakota State University Extension. “This phenomenon was discovered by Manitoba rancher Gus Konefal, who noted that 80% of his herd calved during daylight hours when feeding first around noon and then again closer to 10 p.m.”

An Iowa State University study yielded similar results with a project that fed cows once a day at 4 p.m., beginning two weeks before the expected start of calving. Overall, 82% of the calves were born between 6 a.m. and 10 p.m. This project also evaluated the calving times of heifers fed under the same protocol. The heifer group calved during the same hourly window 90% of the time.

A survey of 15 beef producers in Iowa and Missouri who fed once daily between 5 p.m. and 10 p.m. found that 85% of cows calved between 5 a.m. and midnight. This data was compared to cows not on the late-day feeding system in the same herds. Those animals calved 50% during the day and 50% day at night.

A group of USDA researchers in Montana also initiated a three-year study evaluating differences in feeding time on calving time. Their results were not as dramatic as Konefel’s results or the Iowa State study. However, there was a consistent 10% to 20% decline in the number of cows calving between 10 p.m. to 6 a.m. in the late-fed cows compared to the early fed cows.

Harty lists several points to remember for producers who choose to implement the Konefel feeding system in their herds.

• Start one month prior to calving, although a shorter duration before the start of calving will still have some effect.

• Iowa State advises farmers to stay as close to the same feeding schedule and feed amount as possible each day. Deviations of more than 15 minutes or providing too much feed will yield fewer desirable results.

• It works best in a drylot situation where all feed is provided.

• Weather can play a role in effectiveness. Before or during storms, cattle may not come to the bunk to eat and may be more likely to calve at night.

• Additional research indicates that a first-calf heifer that calves during the day will tend to drop daytime calves for the remainder of her productive years.