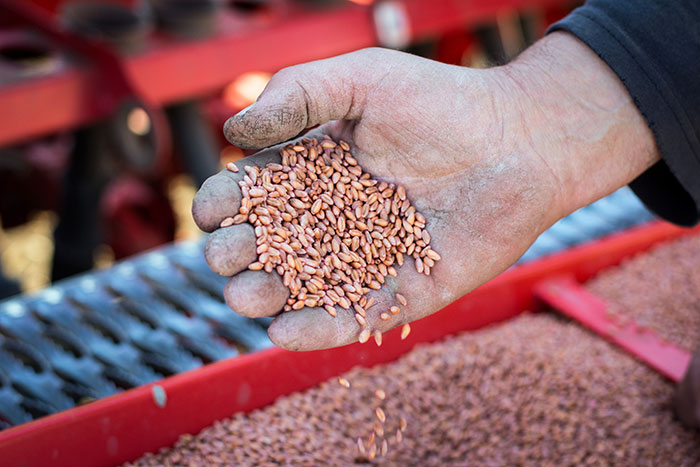 It’s not a foreign concept; saving harvested seed for replanting has been a long-standing practice on many farms. There is also the practice of “brown bagging,” which is setting aside the seed, cleaning it, bagging it, and then selling it to other farmers for planting.

If you’re still in the camp of doing either one of these practices, proceed with caution.

In many cases, seed can’t be saved because of several laws or restrictions. However, according to Michael Trammell, senior plant breeder, and Suresh Bhamidimarri, assistant professor, at the Noble Research Institute, there may be some cases where seed may be saved and used by the farmer or rancher who originally purchased the seed.

“In the United States, there are a number of legal forms of protecting seed and its use, including Plant Variety Protection (PVP), patents, and contracts,” explain the researchers in the Noble Research Institute’s Noble News and Views.

First off, it is crucial to know if your seed is protected. The answer will be on the label of the bag. Usually, the phrase “unauthorized seed multiplication prohibited by law,” or the PVP symbol will be printed on either the label or bag.

The authors also advise to talk to your seed dealer or company representative you bought the seed from. You may be required to sign a limited use or technology agreement that restricts or prohibits the practice of saving seed.

The first form of legal seed protection addressed by the authors is PVP. Developers of new varieties can use PVP to limit the marketing and sales of the newly developed varieties.

“A PVP allows the farmer or rancher who purchased the seed to save seed in certain cases for replanting on their own farm or land they rent or lease; however, that same farmer or rancher may not sell saved seed to others without authorization,” the authors explain.

But even with that option, the owner of the variety still has some control. They may specify the amount of seed that can be saved and the quality standards the seed must meet. To maintain the integrity of the variety, the variety owner may insist on cleaning the seeds at their facility.

The second form of protection is through patents. A patent can protect not only a specific variety but also a hybrid, improved trait, or particular gene associated with a cultivar. Seed from a cultivar with the Roundup Ready trait is an example.

“It is not unusual to see a plant variety protected by both a PVP and a patent,” the authors state. “Most importantly, there is no exemption under current patent law that allows a farmer or rancher to save seed protected by a patent,” they add.

Contracts are another form of legal protection. In some instances, a seed company may require you to sign a limited use or technology agreement before purchasing seed. This agreement prohibits the saving of seed or specifies the conditions under which the seed may be saved.

The authors warn that in many cases, simply opening the bag could be accepting the terms of the agreement or contract. “Just remember, as all seed companies are different, each contract has its own terms,” the authors advise.