Bale grazing tips from north of the border 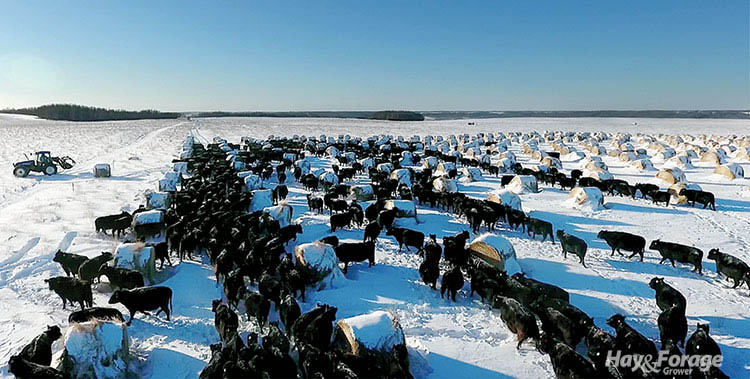 While livestock producers in the southern U.S. have their cattle grazing on lush cool-season annuals through the winter months, their counterparts along the northern U.S. border are pushing snow just to get access to more hay bales. In the latter situation, coffee shop talk never gets around to 365-day grazing systems, or at least not in the conventional sense.

What sometimes is discussed in those Northern coffee shops are the benefits and challenges of bale grazing, a winter-feeding system that is popular in Canada and being implemented by a growing number of U.S. cattle producers in areas where the ground remains frozen for an extended period.

Canada’s Beef Cattle Research Council recently provided a two-part series of articles on bale grazing that outlined critical practices for success and highlighted three producers who have used the strategy with exceptional results.

At its core, bale grazing is simply a system whereby round bales are strategically placed in cells or “bale pods.” Cattle are given controlled access to a cell, and portable electric fence is used to restrict movement beyond the cell. In some respects, it’s very similar to strip-grazing conventional pastures.

Bales are generally set on their round sides, 35 feet to 40 feet apart, and bale twine or net wrap is removed prior to cattle access and often before the binding material freezes to the bale.

Many current users of the system select sites that need additional soil fertility, which in bale-grazing is provided by hay waste and from the cattle’s urine and manure.

The number of days producers choose to allow their cattle access to a pod of bales will depend on how many bales are placed, the quality of the feed, the body condition of the cattle, the weather, and the user’s management style. Some producers will move cattle every two to five days, while other producers will allow cattle feed access for 20 to 30 days at a time before moving them.

To maintain cow performance, it’s critical that animals be given access to the correct number of bales for a given period of time. Making this calculation requires that you know nutritional requirements, feed quality, and quantity, so bales need to be tested and weighed. A roller coaster of too much and then not enough hay needs to be avoided, and offering a balanced diet depends on an accurate forage test.

Bale grazing can improve perennial pastures and even be used to reduce brush encroachment. Field selection is important. Avoid placing bales near environmentally sensitive sites, such as wetlands or creeks. Also, do not bale graze on native rangeland to prevent the introduction of invasive or weedy species.

Monitor the snow situation throughout the winter. Do not plan on using snow as the sole water source for lactating cows, freshly weaned calves, or cattle with a body condition score of 2.5 or lower. A melting snow pack will cause animals’ stock water demands to spike, even if other water is available.

During times of abundant snow, cattle will expend extra energy to access feed. This is a situation that needs to be avoided for animals that require a high level of nutrition, such as calves, young cows, or thin cattle.

It’s always important to have a back-up plan with any outdoor winter-feeding system. A long, harsh winter may enhance the need for additional shelter, higher quality forage, or supplementation. Cattle need to be closely monitored to ensure desired performance.

To get more bale grazing tips and read about three Canadian producers who have successfully implemented bale grazing, click here.

The root of the soil organic matter: Part 2 Next

Get a handle on hay protein Previous